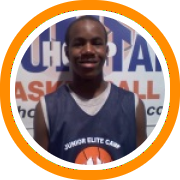 It was a one-two backcourt punch that led the way for the Nets at last week's Hoop Junior Elite Camp as they were among the contenders in the NBA East.

Players who rose above the pack:

Brian Mukasa, 5’8”, PG - Mukasa is a point guard who has impressed onlookers with his quick first step, shotmaking, playmaking ability, length, and athleticism. This lefty guard is a confident kid with a strong work ethic who is poised to make an impact next year at the high school level.

Zach Radz, 5’4”, PG - Radz is a youngster playing up with the older kids because of his ability to knock down shots consistently. He can stretch a defense with his three point shooting ability but also handles the ball well when the defense is pressuring.

Nate Caruso, 5’6, SG - Caruso is a young combo guard with solid ball handling ability who makes few mistakes running an offense. To complement his dribbling and decision making, Nate has a knack for finding spots on the floor where he can get open, catch and hot mid range jump shots.

Jared Walkoff, 5’10, PF - Walkoff is a power forward who works hard to earn praise from his coaches. Jared comes up with gritty hustle plays game in and game out, and rebounds well at both ends of the floor.

Ben Phillips, 5’10, SF - Ben is a lefty small forward whose active on the offensive end and does a good job taking his matchup into the paint and scoring with a decent repertoire of post moves.

Jon Spillane, 6’2, C - Jon is a wide bodied 5 man who finishes around the rim. He controlled the boards on both ends of the floor in his Friday games. What we also noticed was his understanding of how and when to set good screens, both on and away from the basketball.

Alex Loughnane, 5’10, G - Loughnane has a variety of good offensive moves to the rim and to set up his jump shot off the bounce. He loves to use an up fake to get his man in the air and make a play. You can tell from watching Alex that he is a well coached kid.

Reese Fulmer, 5’0”, PG - A Pint Sized guard who does a great job running an offense, Fullmer caught our eye with his all around skill set at the lead guard position. Reese can shoot the three ball, attack in transition, make plays for others, and protect the ball.