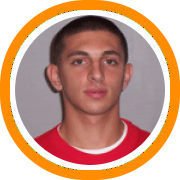 Is he big enough?

Is he a point guard?

These are the questions Joe Accaoui has heard whispered over the last few years.  But after a solid summer with the New England Playaz and a tremendous season at St. Andrew’s, Accaoui has silenced his doubters and racked up quite a few scholarship offers in the process.  After it was all said and done offers had rolled in from Longwood, St. Francis (NY), St. Peter’s, Cornell, Maine, Stony Brook, and Vermont.  Finally, last Wednesday when he was on campus for an unofficial visit Accaoui made it official for the Catamounts.

And while Accauoi may be more of a combo guard then a pure point and is undersized, he also may be one of the most skilled, pound for pound, players in New England.  He is lethal with his shot as was evident when he won the three-point shooting competition at the New England Elite 75 showcase converting 72% of his attempts.  But in the last year he is added a mid-range game that is almost as effective with a variety of spin moves, step back dribbles, fade-away jumpers, and floaters at his command.

At Vermont, Accaooi joins a program that was less then 10 seconds away from there 4th NCAA tournament appearance in five years a few short weeks ago.

“They have a tradition of winning and post season play,” said Accaoui “plus a great academic program.”

Not only that, but Accaoui will be joining his Playaz and St. Andrew’s teammate Garrett Kissel as they follow in the footsteps of another Rhode Island native who had a lot of success in Vermont.

“Garret being there was definitely a plus, and T.J. Sorrentine was a local kid who had a lot of success there.”

Despite the fact that Vermont is returning arguably the conference’s best player in Mike Trimboli, who also plays the point, Accaoui is confident if he works hard enough and plays well there will be playing time to be had.

“Coach Lonergan talked about playing us together.  He said we are going to try and play at a quicker pace next year and may play three guards together at times.  Mike is versatile and can play either guard position, and I think I can too.  He’s a great player.  I’m just looking forward to being on the floor with him.”

With Trimboli (a junior) returning as well as 6’7 sophomore forward Joe Tripani, Vermont is likely to be the pre-season favorite to win their conference and return to the NCAA tournament

“That would be a dream.”