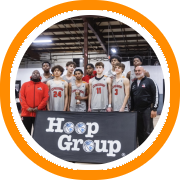 Hoop Group hosted their annual New England Jam Fest event this past weekend at The Mill Works in Westford, Massachusetts. It featured a diverse field with teams from Pennsylvania all the way up to Maine.

One of the most anticipated matchups of the Spring took place on Saturday as part of the Showcase games with Middlesex Magic-UAA taking on Expressions Elite EYBL. Middlesex came out victorious, having five guys score between 8-12 points.

In the 17u Platinum bracket, Expressions Elite Eybl 16u played up and won the championship against Basketball Club Rhode Island. Two other New England programs made the Elite Eight as part of the 28 team field. They were The House We Built-HGSL and BABC EYBL.

It was another title for an Expressions Elite team playing up in the 16u Platinum bracket, with their EYBL 15u team taking home the championship against Mass Premier-Introini. Three other New England programs made the Elite Eight as part of the 32 team field. They were Middlesex Magic-HGSL, ASA Select, and Metro Boston-HGSL.

Over in the 15u Platinum bracket, Team New England-HGSL came out on top, winning the championship game by 17 points. Two other New England programs made the Elite Eight as part of the 32 team field. They were Basketball Club Rhode Island and New England Storm-Piecuch.