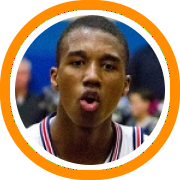 ESPN Boston’s Brendan Hall reported on Tuesday that Rockland High School graduate Tyler Gibson had been released from his National Letter of Intent with UMass Lowell and had subsequently committed to Bentley University.

Former Boston College and Northeastern assistant Pat Duquette took over the UMass Lowell program that is now set to join the America East Conference and division I ranks as of July 1st.

Gibson was reportedly one of two former Herenda commits to recently receive their release, joining Albertus Magnus (NY) guard Jack Sullivan, who may also end up back in the Northeast 10.

Gibson, who was the Gatorade Player of the Year in Massachusetts this year, averaged 21.4 points per game this season along with 15.3 rebounds and 4.8 blocks, reportedly visited Bentley and Merrimack on Sunday and Monday respectively, before committing to Bentley on Tuesday.