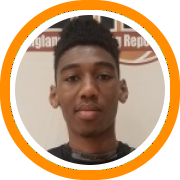 Woodstock Academy post-graudate, Bishop Hendricken alum, and Metro Boston wing T.J. Weeks made a verbal commitment to the University of Massachusetts on Sunday at the conclusion of his official visit.

"I'm grateful and thankful for all the opportunities I've been given. I'm grateful for my family supporting me from day one. I'm thanksful for my guys Mo, Oscar, and my Metro family as well as Coach B and the rest of my Woodstock family," Weeks told NERR. "I look forward to a great career at UMass."

"I'm happy for the Weeks family," Metro Boston director Mo Vasquez said. "Here is a kid whose father helped build the UMass program and will continue the trend of hard-working, great character people that will contribute to a program on the rise once again."

Weeks was a very young senior when he graduated from Bishop Hendricken last spring without a division I offer to his name but has taken his game to new levels in the last year beginning with a strong spring and summer with Metro Boston. He got off to a good start this fall at Woodstock, but was temporarily derailed by an ankle injury that kept him out of the line-up to start the season.

He's been one of the biggest breakout players in New England since the first of the year, reportedly averaging over 15 points and 3 steals per game while shooting the ball at an unprecedented clip from behind the arc.

He started picking up new offers shortly after his return in March and continued to ascend leading to his commitment on Sunday.

Weeks becomes the 9th member of Woodstock Academy's 2019 class to commit to a division I school.