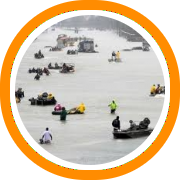 There are times when things happen in the world that can make basketball seem unimportant.

The last few days have been among those times as Houston, Texas has been pounded by Hurricane/Tropical Storm Harvey and the flooding that came along with it. It isn't even over yet as experts are predicting some 50 inches of rain in the city before the week comes to an end leaving thousands trapped and/or homeless.

Many of the images to come out of Houston in the last 48-72 hours have been both horrifying and inspiring as images have shown incredible damage due to the flooding while also painting pictures of unity and heroism in the face of those increasing challenges.

On Monday, University of Houston head coach Kelvin Sampson took to twitter to tell the basketball world how they can help contribute to the recovery efforts, calling on coaches and teams from all levels to donate shirts and shoes to those who have lost everything in these floods.

Today, we're echoing Sampson's message and calling on the New England community to help. Please send whatever you can to: