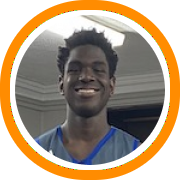 The Diamonds in the Ruff Top 40 event showcased some of the top underclassmen in Long Island and the surrounding area last week and the Be Seen Tour was on hand to capture all of the action.

We’ll begin our coverage with a full recap of the event, but make sure you stay tuned to all NERR platforms later this week for the full #BeSeen Movie Trailer from Hoop Major.

Long Island Lutheran and PSA Cardinals guard Jayden Reid was the best player in the gym. He had the full gamut of attacking tools – burst off the bounce, change of pace, and the ability to penetrate to both sides. But he also had a feel for the game as he was smooth and instinctive with the ball, never over-penetrated, and just controlled the flow of the game every time he was on the floor.

Here’s a look at some of the others that impressed, beginning with the class of 2023:

Jakari Tertulien, Bridgeport Prep – His physical tools made him one of the first prospects to stand out with good size and a powerful body. But his game lived up to that first impression as he was long and efficient with his bounces, able to push the ball up the floor himself, and had a variety of finishes in his bag – going body to body, using his left, or getting up for dunks.

Jarrett Dingle, Academy Charter – One of the most talented prospects in attendance, Dingle also stood out early with his strong build & physicality, but he had more subtly to his game than just overpowering smaller guards. He didn’t force anything, made soft two-foot floaters, and used high IQ type bounce passes.

Mano Idir, St. John the Baptist – This was our second time seeing Idir this fall and he continued to impress with his skill-set and ability to shoot the ball, but also showed new elements in this setting. He played bigger on the perimeter, rebounded, passed well, and even took smaller defenders into the post to show his full versatility.

Rayshawn Mitchell, William Floyd – A long-armed budding big wing, Wallace is still raw but has clear potential. He’s active on both ends, able to fly around the court, and shows potential as a slashing big wing as he tightens his game, handle, and builds out the rest of his skill-set.

Jayden Haywood, Wyandanch – Previously unknown, Haywood showed clear long-term potential. He hasn’t started to fill-out yet but he has a long frame to grow into, a solid early shooting stroke, quickness with the ball, and bounce at the rim. He’s a prospect whose progress we are very interested in monitoring.

Anthony Daley, Deer Park – His skill-level caught our attention early, but everyone in the gym was aware of him when he started to make shots and score in bunches to start the all-star game. As he continues to grow and develop physically, he’s going to be another prospect to keep an eye on.

Mysonne Pollard, Bridgeport Prep – A powerful lefty wing with some big guard potential, Pollard played in attack mode and showed a lot of burst making plays to the rim with a combination of strength and athleticism that set him apart relative to the rest of the field.

Kendrick Wilson, Half Hollow Hills West – He was very sound with the ball and had playmaking instincts to match. Whether it was splitting defenders for a tough lefty lay-in or finishing a crafty wrong-footed lay-up, he made a couple plays to catch our attention and also showed a clean release to keep developing with his jumper.

Muneer Ibrahim, East Meadow – His physical profile may not have grabbed anyone’s immediate attention, but Ibrahaim showed he had plenty of game. First and foremost, he’s a shooter with a pretty compact release for his size and rotation to match. He’s also got a handle, knows how to change speeds, and was opportunistic taking opportunities to prove his worth.

Drew Feinstein, Port Jefferson – He was physically ahead of most other guards, not just because of his size and strength, but also with his motor. He played hard, played with pace, and played the right way as he passed it well, competed on both ends, and picked his spots to prove his individual offense.

Brian Blanchet, Phelps – Still just 14-years old, Blanchet is already pretty strong with plenty of still untapped potential. He has a solid stroke and quality motor that just keeps running. In fact, he went hard for back to back workouts here for a total of three-plus hours.

P.J. James, Bridgeport Prep – A bulldog style lead guard, James was a skilled handler and passer but also able to leverage out space with his strong upper body. He was equally crafty, spinning off contact to get into the lane and making wrong-footed one-handed lay-ins.

Marcus Howard, Wyandanch – A versatile match-up along the frontline, the 6-foot-4 forward would bully his way into open space around the paint and looked just as long as he was strong. He also had a soft touch at the free-throw line and some floor-spacing potential to develop.

Dwayne Pierce, Christ the King – A budding big wing who is an early physical mismatch because of his long arms and thick build, Pierce is a big-bodied playmaker and sneaky athlete at the rim who has shake off the dribble and even showed signs of developing shooting range to the three-point line.

Preston Edmead, Deer Park – Probably the best freshman guard in the building, Edmead is undersized but an absolute jitter-bug with the ball who has jets to accelerate on demand, giving him an extra gear to shift into. He’s got to develop physically, which should smooth out his stroke, but he’s got lots of early game and clear long-term potential.

Oke Okrokoto, Christ the King – The Riverside Hawks product is a true big man, and it’s hard for true big men to stand out in settings like these. Nonetheless, Okrokoto’s size and strength at his grade are completely unmatched. He’s got to keep developing his skills and fundamentals, but there’s physical tools here that you can’t teach.

Luke Cronin, Great Neck North – With an early combination of size and skill, Cronin looks like a budding face-up four-man. He already has good size and high shoulders that suggest he might still be growing, along with a soft touch not just around the rim but also facing the basket.

KJ Anderson, Melville – A similar budding face-up forward, Anderson also stands at 6-foot-5 with a solid base and potentially a couple more inches to go. He had a nice early foundation of skill to compliment his size and could make that combination his calling card in the years to come.

• Yorktown’s Justin Price is a heady point guard who played with his head up, showed good early positional size, and a passing mentality beyond his years

• Ward Melville’s KJ Anderson has good size at 6-foot-5 along with some early skill.

Kavon Simmons, Long Wood – An 8th grader allowed to play up, Simmons was undersized and undeveloped physically relative to the high school kids, but was clearly still talented with the ball in his hands.

Danny Carbuccia, Mount Hall – The second of two youngsters allowed to play up in this event, Carbuccia showed he belonged from start to finish and even played his way into the all-star game.