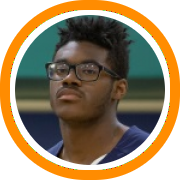 After a storied four year career at the Pingree School, Alonzo Jackson played one final month on the grassroots circuit and in so doing earned himself a full athletic scholarship.

The 6-foot-6 big man joined the Mass Rivals Select team and helped the squad to a championship at the recent BasketBull event.

His efforts led to offers from both Assumption and St. Anselm and after visits to both NE-10 campuses, Jackson committed to St. Anselm last week.

Jackson played the majority of his grassroots career with the New England Playmakers before joining the Rivals this spring and had a decorated career at Pingree.

He was named honorable mention All-New England in Class C as a sophomore, 2nd team All-New England as a junior, and 1st team this past year as a senior. He also scored over 1000 career points during the course of his high school career.

Below are some of his highlights from last summer.