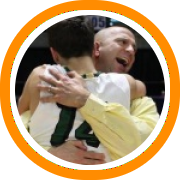 The RIIL is the only of New England’s six state associations to host a state open championship for boys’ basketball, designed to crown one undisputed state championship.

Ironically though, the post-season still begins with the more traditional division based state championships.

La Salle captured the division I title with their trademark aggressive defense leading them to a 62-53 win over North Kingstown as Mike McCourt and Keon Wilson each scored 14 points.

North Providence knocked off Barrington 55-51 in the division II final, completing an improbable run to the state championship after graduating ten seniors from the previous year’s team.  Chris Corin scored a team high 21 points, including the final four of the game to break a 51-51 tie at the 20 second mark.

Juanita Sanchez knocked off Mount Hope in a high scoring division III final 82-66. Miguel Prieto punctuated his season with a 31 point performance in the championship game.

Immediately after the divisional champions were crowned, the 16 team field for the state open championship was announced, giving 13 teams a chance for redemption after falling in their respective division tournaments.

Hendricken would face 10th seeded Central in the championship game, a team that was riding a wave of momentum after knocking off a trio of higher seeds in route to the finals.

Ultimately, Hendricken would take a 50-35 decision to take the championship, winning their firststate title in four years after head coach Jamal Gomes led them to a record setting seven straight titles from 2004-2010.  Garfield Coustard and Kyle Henseler scored 11 and 10 points respectively to lead Henricken in the finals.

Juanita Sanchez senior guard Harry Calderon led the state in scoring this year at just under 26 points per game, including his 1000th career point.  Barrington junior guard Corey Daugherty, who is already committed to Brown, was second in the state at 23.4 points per game while Classical senior point guard Kealen Ives was third at 22.8.