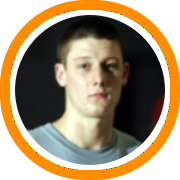 Worcester Academy’s Austin Carroll recently made public that he plans to do a post-graduate year and join the class of 2010.  It didn’t take long for that announcement to generate a response from college coaches as the Atlantic 10’s Fordham University was quick to extend a scholarship offer.  With Rams assistant coach Jared Grasso in the gym on Saturday, along with Western Michigan head coach Steve Hawkins, Carroll went off for 7 three-pointers and 30 points in a win over New Hampton.

In the highly anticipated rematch between the class B and C defending champions, the Tilton School defended their home court and knocked off St. Mark’s 87-74.  Jamal Coombs was the day’s biggest star as he finished with 28 points, 8 rebounds, and a variety of crucial plays.  But balance was also crucial for Tilton as every starter scored in double figures: Alex Oriakhi, 14 points, 5 rebounds, 2 blocks; Gerard Coleman, 13 points, 7 rebounds, 2 blocks, 2 steals; Scott Tavares, 15 points, 4 assists, 2 steals; Georges Niang, 13 points.  Tilton held only a 2 point advantage at the half (40-38) after St. Mark’s Florida bound big man Erik Murphy exploded for 18 points in the first half.  Nextplay.com was on hand to film the game and has it featured as their game of the week.  To watch the game in its entirety please visit http://www.nextplay.com/game_week.aspx or check out the NERR homepage for a highlight video produced by Nextplay.

Despite missing their head coach John Carroll, who was forced to skip the road trip as he battled pneumonia, NMH scored wins over the Hun School and Blair Academy to win the four team tournament.  Mike Marra had a team high 22 points in the championship game.  First year coach and former UMass Minuteman, Matt Pennie, earned the first two W’s of his coaching career.  The Hotchkiss School was also in the field and finished 1-1 after falling to Blair and then knocking off Hun.

Notre Dame Prep went 3-0 last weekend.  On Friday night they scored a win over IMG Academy at the Hoop Mountain Prep Classic.  Then they traveled up to Maine Central Institute for their annual tournament.  On Saturday they defeated Brewster in the semi-finals and Sunday they knocked off Lee for the tournament championship.

The Vermont high school season got underway last week and so far two of the biggest performers are the Donnelly brothers.  Senior John Donnelly and younger brother Jake Donnelly combined for 44 points and 18 rebounds, 24/12 and 20/6 respectively, in CVU’s season opener on the road against St. Albans 75-52 to begin the season on Thursday night.

The High School season is also off in full swing in the state of Maine.  Among the notable performances thus far are 34 points from James Morse as he led Thornton to a 67-46 win over Portland on opening night.  Keegan Hyland scored 32 as South Portland beat Massabesic 86-45.  Hampton also beat Bangor 44-36 in a notable result.  Stay tuned later this week for a full Maine preview.