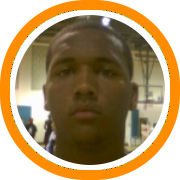 Isiah Wallace doesn’t have any misconceptions.  He knows what his critics say.  And while the Springfield, Massachusetts native still has a ways to go before maximizing his potential, he utilized his post-graduate season at Bridgton Academy to show people he can produce against just about anyone.  Now he is headed to Central Connecticut State University.

“He put up really good numbers on a consistent basis.  I don’t care who it was against,” said Bridgton Academy Head Coach Whit Lesure.  “I have had guys rated as better players who are far less productive…and part of the proof is in the pudding.”

Wallace may have been Bridgton’s most consistent player this year.  The more you watched him play, the more it seemed like a virtual certainty that he would finish each game with close to 20 points and 10 rebounds.

But his body remains a question mark.  Even during the season he saw plenty of ups and downs with regard to his conditioning.  As Lesure explained, the prep school schedule almost worked against Wallace, as it seemed every time he was turning the corner he would return home for vacation and suffer a bit of a set back.

And while Wallace had an undeniably successful season at Bridgton this year, his play last month with the Team Maine really showed what he is capable of when he gets himself in shape.  Not surprisingly, he played some of his best basketball of the year after having gone through his longest stretch without a vacation.

“What you saw this spring was a kid who hadn’t had a vacation in a long stretch of time,” Lesure said.  “He got up and down the floor better, shot the three better.”

Essentially he was the complete package.  Not only was he finding ways to score and rebound in the lane, as he had done throughout the prep school season, but he was also acting as a bit of a distributor, showing his ability to handle and pass the ball in the open floor while also shooting the ball from long distances.  If he can continue to improve his body and his conditioning, he could end up being a big time player in the NEC.

“He’s going to be good.  He’s an easy kid to be confident in,” Lesure said.  “Is he so good he can step right in…that depends on what he does this summer.  Is he so good that he can potentially be an all-conference player…I think so.  I don’t think it is out of the question that he is a potential player of the year candidate down the road and someone who others will admit they made a mistake on.  But until his body changes he is only so good.”

For Wallace, the most appealing thing about Central Connecticut may be Head Coach Howie Dickenman.  Dickenman is “old school” as Lesure describes him.  He demands hard work every day on both the court and in the classroom.