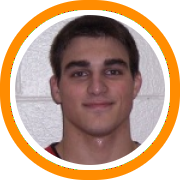 With the season approaching playoff time, we thought we would look at where the teams stand in Vermont according to the VPA index used to rank teams for playoff pairings.

1. Burlington High School, 15-0
They have now reeled off 39 in a row over the last two years, and no other than Rice no one has even come close to stopping them. Joe OShea, Clancy Rugg, Shane Norris, James Hale, and company are in the driver’s seat to bring it home again.

2. Rice High School, 11-2
Rice is playing very well at this point.  They’ve got Jon Goldberg and Nick Meunier and if they can get numbers from David Gagne and Marcus Dutkiewicz, they’re capable of giving Burlington a scare.

3. South Burlington High School, 12-3
This team can put points on the board with Eric Dubuque and Tyler Kaczor banging in threes. With only one senior starter, the future is bright for Mike Kennedy's Rebels!

5. Essex High School, 8-4
No one should look past this team. Demir Smajovic has been lighting it up and as a group they have many different people who can score on a given night.

7. Hartford High School, 10-4
Senior Logan White has hit the 1000 point mark and leads the way. This team has played a slightly weaker schedule so the jury is still out, but they had a legit win against Brattleboro last weak.

1. Mill River Union High School, 11-3
They have proven to be the front runner in division II.  They gave D1 Rutland all they wanted in a battle earlier this year

2. Vergennes High School, 11-2
Connor Merrill is one of Vermont's best, as is Coach Pete Quinn…meaning they’re a legitimate contender.

2. Thetford Academy, 9-1
Jason Gray may be able to lead them to the promised land.

2. Danville High School, 10-2
This school with a rich hoop heritage could surprise everyone!!

*Records are as of the beginning of the week*