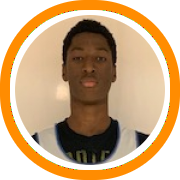 One of the key takeaways from NERR's Open Gym Series is the abundance of younger players that, if they continue to develop, will leave Vermont basketball with very solid college prospects over the next several years.  While most college coaches focus on the junior & senior classes as their primary sources for recruiting, the younger talent in the gym means that the future is bright in Vermont.

Today, we will highlight the backcourt & frontcourt standouts for the Classes of 2022 & 2023.

Jonah Cattaneo (Montpelier, 2022)- A lefty who is more than capable of putting up points from long range in bunches, Cattaneo has a very quick release on his jumper that makes him really hard to account for.  He is also a great interior passer once he gets in the lane, but also has the vision to read help defenders and kick out to his open teammate when he has the opportunity.

Ethan Murphy (Champlain Valley Union, 2023)-  Murphy had dominant stretches in full-court action on Friday night.  The long-armed shooter gets his feet set under him and lets his shot fly with a lot of confidence.  He had the crowd buzzing after hitting four straight 3-pointers in transition during the fast-break segment of the showcase.

Heath Walker (Rice Memorial, 2022)-  A lefty shooter with a quick release, Walker is all arms & legs at the moment.  He has the potential to develop into a crafty scorer.  With his solid motor, he is one to keep an eye on as the years move on.

Ryan Sweet (South Burlington, 2023)- Another lefty in the field, Sweet proved he can nail shots with defenders draped all over him.  Once he takes another step physically, his shot should quicken and he should become a more dangerous offensive player.

Tyler Chapin (Sharon Academy, 2022)-  One of the best pure shooters in attendance, Chapin possesses a lethal step-back.  He keeps his head up to find his open teammate, and he does not rush his own offense.

Cole Banks (Williamstown, 2022)-  Banks has a very soft touch on his jumper.  He moves very well laterally, enabling him to defend a multitude of positions, including being able to keep quick guards in front of him.

Zach Thompson (Mascoma Valley, 2023)-  A good shooter who is small but can hold his own physically, Thompson’s fearless attitude will serve him well moving forward as he takes on bigger & stronger competition in his first high school season this upcoming winter.

Cooper Diego (Spaulding, 2023)-  Diego can finish with both hands effectively.  While playing hard and defending the perimeter well is a must-have for programs today, Diego has the bloodlines to believe that a growth spurt is inevitable.

Andre Prunty (Mount St. Joseph’s, 2022)- Armed with a swagger to his game, Prunty drilled big, contested shots for his team throughout the event.

Alex Provost (Champlain Valley Union, 2023)- Another high IQ shooter, Provost has the ability to play multiple positions on the offensive end.  He delivers the ball at a high rate, and can be seen as someone who will be hard to take off the court as he gets older.

Sharif Sharif (Rice Memorial, 2023)- Sharif seems like a prime candidate to take the baton in the long line of successful Rice products. The wing is steady with the ball, and more than capable of attacking either right or left. What is intriguing is his scoring production from all three levels right now. As a young player, that is a difficult trait to find.

Colin Mathis (Milton, 2023)- Mathis has good footwork on his catch coming into his shot.  One of the younger players in attendance, Mathis has a lot of raw talent that, combined with his size & willingness to play within team concepts on offense, could make him one to watch in the freshman class in the state.

Riley Severy (Spaulding, 2023)-  The hard-working wing rebounds at a high level and showed he can anticipate where the rebound will come off.  His shot is smooth, but (like many young prospects) it has a chance to really take off as he develops further physically.

Jacob Williams (Mount St. Joseph's, 2022)-  Still showing up ready to play after recent shoulder surgery shows this young man's dedication to the game.  His massive 6'6 frame stands out immediately once you enter the gym.  Although cleared for non-contact drills, he participated in the skill workouts and showed good footwork (inside and out) and a soft shooting touch.