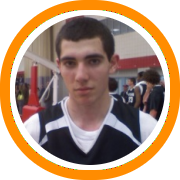 Over 20 college and prep school coaches made the drive north on Sunday afternoon to attend the 2nd Annual Vermont College Showcase presented by Lone Wolf Athletics.  The majority of the top prospects from all over the state were in action at St. Michael’s Ross Gymnasium, as were some players from the Full Package Athletics Program in Chicago.

Jared Prince, Loyola Academy (Chicago) - The 6’7 forward used his length and touch around the basket to frustrate defenders all day long.  In addition to finishing around the rim, Prince had a consistent mid range jump shot and played aggressively on the defensive end.  He blocked and altered several shots and was able to get out on the fast break and run the floor. He is rumored to be looking at Ivy League and NESCAC schools.

Ben Ferris, Essex HS – Ferris picked up right where he left off in July with another phenomenal performance on Sunday. The 6’2 combo guard scored over 15 points in each of the three games hitting mid range jumpers off the dribble, getting to the rim with a variety of perimeter moves and knocking down the open three.  Ferris was tenacious on the defensive end, and also showed off his athleticism with a flush in transition.

The duo of Jake Donnelly and Alex Snyder led their team to an undefeated record on Sunday.  Donnelly did an excellent job getting into the lane and drawing help side defenders before dishing off to teammates for easy finishes.  Snyder was a monster on the offensive and defensive boards and showed a good touch around the rim.

Evan Tullar, Spaulding HS -  Known for his athleticism in transition, Tullar showed an improved ability to hit the mid range jump shot off up fake and jab step moves in the half court. The 6’4 wing also used his length to finish off drives to rim over defenders.

Connor Merrill, Vergennes HS – Merrill was one of the most versatile players at the event. He showed off a nice baseline spin move in the post, and also knocked down the three-pointer consistently. He is 6’6, and his wingspan is deceptively long.

Jordan Liss, Glenbrook North HS (Chicago) – Liss did an excellent job running the pick and roll and reading the defense. He was able to turn the corner and finish, and also found teammates with his passing ability.

Eric Suder, Mt. Mansfield Union – After some strong performances at the Super 16, Suder once again showed off a solid post game converting on turn around jump shot and drop step moves. At 6’8 he is difficult to contain when he established good position down on the block.

Chad Copeland, Twinfield HS – One coach referred to Copeland as “the best prospect here.” The 6’6 forward (who is still growing) scored effectively around the basket all day utilizing his polished up and under move.

Harrison Taggart, St. Pauls – The 6’4 point guard started off the event slow, but finished strong. Taggart has excellent ball handling and passing skills for a player his size. He finished off his drives and showed off an improved jump shot.

Other Seniors With Strong Performances

Ryan Shea, U-32 – After some strong performances with Lone Wolf in July, Shea once again was able to knocked down the open three and get in the lane with his jump stop. Shea is a high IQ player that rarely makes mistakes.

Mac Stannard, Fair Haven – This was our first look at Stannard and we came away impressed. The 6’4 senior showed a diverse offensive skill set, scoring inside and knocking down the 15 footer.

Troy Davine, Rutland HS – One of the quickest and most athletic guards in the class of 2011, Davine used his ball handling skills to get by his defender off the dribble all day.

Curtis Rodgers, Burlington HS – Rodgers scored 20 points in his first game moving well without the ball and draining the open shot. The 6’2 senior also played solid help side defense in the half court.

Josh Varney, South Burlington HS – Varney used his frame and size to back down defenders in the post and score. He also controlled the glass and altered shots on the defensive end.

Nick Swim, BFA St. Albans – The St. Albans senior is a heady point guard that creates for teammates and feeds the post well. He also showed the ability to knock down the long range shot when open.

Robert Russ, Champlain Valley Union – The 6’ senior was one of the most hard-nosed defenders at the event. He also showed touch and accuracy on his mid range jumper.

Matt St. Amour, Missisquoi HS – One of the best pure shooters at the event, St. Amour hit four trifectas in his first game. The 6’2 sophomore has a very high basketball IQ and dribbles and passes well in transition.

Josh Claflin, Hartford HS – One of the fastest players at the event, Claflin pushed the ball in transition as well as anybody. The 5’10 sophomore used his spin move to get to the rim and also set up his teammates for easy scoring opportunities.

Tre Hysell, Rutland HS – The 5’10 sophomore was as heady a floor general as there was at the showcase.  He keeps his head up, sees the floor, and was able to get into the lane and finish. We were impressed with how hard he played on both ends of the floor.

Marcus Willingham, Rice HS – The 6’4 sophomore was one of the best all around athletes at the event. He battled for rebounds and finished off plays. His mid range jump shot continues to improve.

Casey Tipson, Rice HS – The 6’ combo guard did a little bit of everything on Sunday. He made some nice bounce passes, knocked down jump shots off the dribble, and drained a couple corner threes.

Pavin Parrish, Rochester HS - The showcase gave us a chance to look at some of the top talent from the class of 2014. The freshman who made the biggest impact was Pavin Parrish, a 5’9 point guard from Rochester HS. Parrish has excellent court vision and ball handling skills. He scored in double figures the game we saw and was clearly not intimidated by the older players.

Anthony Granai, Colchester HS – Nobody works harder on the court than Granai, who has really improved his shooting range this summer.

Pat O’Rourke, MSJ – After playing well with the Sixers at Hoop Mountain Junior Elite, O’Rourke again had a solid performance showing off his passing and defensive skills.

Tommy Fitzgerald, Rice HS – Fitzgerald showed impressive basketball IQ and maybe the best handles of any player that we’ve seen in the class of 2014.

Lucas Dutil, Spaulding HS – Did an admirable job running the point and setting up teammates for scoring opportunities. The 6’2 guard finishes well going to his right.

Tenzin Gurmey, Burlington HS – pushed the ball well in transition and made shots

Jake Maynard, Rice HS – As good a spot up shooter as there was at the event

Ethan Brown, Mt. Mansfield Union – Long and athletic and scores in a variety of ways

Ryan Tatro, Hazen HS – 6’7 forward did some nice things around the rim

Brooks Mayo, Spaulding HS – 6’5 sophomore has a lot of potential in the post