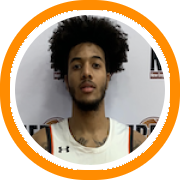 Waters came over to the NEPSAC for a post-grad year at Vermont Academy after having a productive career at Good Counsel of the highly competitive Washington Catholic Athletic Conference.

He was an integral part of a Vermont Academy team that was the seventh seed in the NEPSAC Class AAA Tournament. Waters competed on the AAU circuit with Team Thrill of the Under Armour Association.

“Day came in and I knew he was gonna be able to score, but over the course of the year he really began to impact winning,” said Vermont Academy head coach John Zall. "He was able to guard positions 1-5 which is no easy task in the NEPSAC AAA where frontcourt players are often 6’10+.”

“He made the simple plays on offense and had multiple games with 10+ rebounds. His fit at the D2 level will be great because of his versatility. He’ll be able to guard everyone and will be a consistent rebounder, playmaker, and shot-maker.”

Waters becomes the fourth member of Vermont Academy’s 2022 class to finalize their college plans, while also being the second to accept a scholarship.