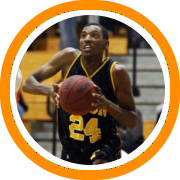 Tilton took their third consecutive NEPSAC Class B title this afternoon with only one member of their “Big Three” still in a black and gold uniform.

With Alex Oriakhi and Jamal Coombs-McDaniel now in their freshmen season at the University of Connecticut, Gerard Coleman returned to Tilton for his senior year ready to carry his team to a championship.

But on championship Sunday, Tilton’s undisputed star got a big lift from his supporting class.

While the Providence bound star scored a team high 20 points and came away with MVP honors, it took big contributions from several different players for the Rams to accomplish the three-peat.

Ryan Canty came off the bench to provide a huge spark in the first half.  After Marianapolis opened the game with a 15-7 run, Canty came in and hammered home a tip dunk on the offensive glass, pulled down a defensive rebound that led to a Coleman run out in transition, and then blocked a big shot around the basket.  The junior big man would continue to dominate the paint on both ends – finishing inside, blocking shots, and controlling the glass.  He finished with a double-double.

Tilton’s second half spark plug was Jeff Adkins.  The post-graduate point guard made a series of big plays, seemingly having an answer every time Marianapoils was in the midst of a run.  Adkins finished with 17 points that included drives all the way to the rim, open threes, and steals that led to break-away finishes.

Marianapolis jumped out to their early lead behind the stellar play of Ike Azotam and Matt Barboza.  Azotam was making a variety of plays going towards the rim while Barboza was coming off staggers from threes, draining one dribble pull-ups, and back-cutting for dunks.

While Tilton was able to slow Marianapolis by shifting to a 2-3 zone the real turning point in the half took place when Barboza was sent to the bench with his third foul.  After Coleman got loose in the open court a few times in the final minutes of the half, Tilton would take a 33-24 lead into the locker room.

Gedas Bertasius would do his best to lead Marianapolis back in the second as he caught fire and began to score in bunches, but any hopes of an upset were crushed when Alex Stoyle and Georges Niang both converted three-point plays between the three and two minute mark.

Ultimately, Tilton would go on to take a 62-50 victory and secure their third consecutive NEPSAC Class B title.