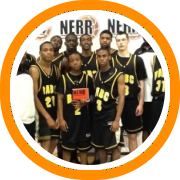 The Boston Amateur Basketball Club’s u15 team is on a run of epic proportions, having won their first 44 games of the spring AAU season including last weekend’s Memorial Day Super 16 championship.

BABC plowed through a competitive field that included many of the most notable programs in New England using their age old recipe of defensive dominance, offensive unselfishness, and clock management.

Picking an MVP from the BABC is a near impossible task.  Simply put, this is a group without egos.  There are no signs of selfishness or individual ambition when you watch them play, only a collective commitment to execute the team’s strategies.

Within that framework, Tyree Robinson was a player who managed to stand out.  He threw down a few of his trademark monster dunks, which were always ferocious enough to single handedly change the momentum of the game.

Robinson also utilized his explosive athleticism to be a factor on the defensive end, blocking shots and crashing the glass to provide an equally dominant defensive presence.

U15 All Tournament Team

Arkel Ager (CBC) - A highly talented young player, Ager owns the strength and athleticism to produce in the paint along with the skill to dribble, pass and shoot on the perimeter.  Certainly a prospect to keep an eye on moving forward.

Jordan Alexander (Team Impact) - He was often times the motor that made this team go as Alexander proved himself capable of putting points on the board and impacting the game in a number of ways.

Bruce Brown (BABC) – A strong and athletic swingman who makes plays on both ends of the floor, Brown has phenomenal defensive instincts and is a highlight reel waiting to happen offensively with his ability to attack and finish above the rim.

Steven Collins (Metro Boston) – Metro Boston made another solid run in the u15 division and Collins was one of the group’s primary contributions, not just scoring points but also making contributions in a number of other areas.

Eric Crawford (Connecticut Select) – He shoots the ball with good range and is very consistent from behind the three-point line, but too versatile to be labeled purely a shooter since he can score the ball in a variety of other ways.

Hilal Dahlel (Greater Boston Lions) – His floor game is diverse and versatile.  He has size and length to scores and pass above the defense, a high basketball I.Q., and the ability to get to the rim as well as make shots from the perimeter.

Chris DiClemente (Rhode Island Hawks) – A power guard, Diclemente is able to bully opposing backliners with his physically advanced tools.  He can absorb contact en route to the rim and plays much bigger than his listed height.

Joey Downes (Rhode Island Hawks) – This lead guard plays with a creative flair that is reminiscent of a poor man’s Steve Nash.  He sees the floor extremely well, can thread the needle with his passes, and is super crafty inside the lane.

Marcos Echavarria (Metro Boston) – A steady presence in the backcourt, Echavarria uses his length well off the dribble while playing low to the ground and utilizing his savvy instincts to make plays for himself and others.

KeAndre Fair (CBC) - Just an 8th grader and already owning a world of potential, Fair showed experience well beyond his years in putting up big numbers and making plays for CBC all the way throughout their run to the finals.

Matt Genevesio (Connecticut Wizards) – He’s a true combo-guard in that he has the skills and basketball acumen to play the point but can also slide off the ball to be more aggressive looking for his shot.  He also has a great motor and hard-nosed approach.

Brendan Hill (BABC) – Arguably the most cerebral frontcourt player in the u15 division, Hill is productive at the high post with his passing ability and also a threat to score and rebound around the basket.  An ideal fit for the BABC system.

Don Jarrett (Connecticut Select) – An athletic six-foot-two guard from Kennedy High School in Waterbury, Jarrett attacks the rim in both the open floor and the half-court in order to put points on the board in high volume.

Ben Judson (Rivals Basketball Club) – A big southpaw guard who has made consistent strides in his game, Judson continues to be a notable threat from behind the three-point line while also becoming more dangerous off the bounce.

Brad Kong (Maine Premier) – A six-foot-nine big man who blocks a lot of shots and has very clear upside, Kong needs to continue to work on his offensive skill set and adjust to the American game, but once he does he will be a strong prospect.

Ben Malloy (MB Nation) – A tough, hard-nosed guard for the Nation, Malloy gets after it on both ends of the floor.  He’s good with the ball in his hands and consistently able to knock down open looks from behind the three-point line.

Tyonne Malone (Rivals Basketball Club) – A rising 2016 product with a ton of tools at his disposal, Malone has size and athleticism to be a top prospect along with the ability to score off the bounce and around the rim.

Terrence Mann (BABC) – A uniquely talented swingman with a world of talent and potential, Mann is another unselfish player who showed off his versatility by filling up the stat sheet with points, assists, rebounds and steals.

Michael Ogbonna (Maine Premier) – A mature point guard who runs the show and makes others around him better, Ogbonna is also a relentless defender who pressures the ball and has a motor that never seems to stop.

David Pacheco (CBC) - The big man held down the paint for CBC all weekend long and put up a double-double in the semifinal before going down with an injury and being held out of the championship game.

Marcel Pettway (BABC) – He personifies the unselfishness displayed by the BABC team because he’s capable of scoring every time he catches the ball but stays true to the team concept and works for the highest percentage shot.

Jack Simonds (MB Nation) – A long and lanky southpaw guard for MB Nation, Simonds is reminiscent of a young Alex Furness in the many ways, most especially the way he works himself into the lane before utilizing his spin move.

Justin Stewart (Rivals Basketball Club) – He’s a floor general who runs his team above all else but still has the individual talent to get buckets when the situations warrants it.  Just the type of trust worthy lead guard coaches look for.

Max Tarter (Princeton Basketball Club) – A freshman at Princeton High School, Tarter is just learning the game and developing his skills, but he has a nice base to work with moving forward and a hard-working approach to the game.

Phyllip Thomas (Spirit Lake Warriors) – A local product from nearby Ledyard High School, Thomas had a strong showing in his backyard by consistently putting points on the board throughout the weekend, hitting the outside shot and going strong to the basket.