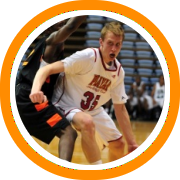 The Super 16 Showcase opened on Tuesday morning with a variety of top programs for the northeast and beyond.  Here is a game by game recap of the action:

The first half was the John Papale show, as he got started early, making 3 out of his first 4 threes. The Hoopstars jumped out to a huge lead thanks to Papale’s 14 first half points. The rising junior has been shooting the ball beautifully from three during the live period and has also displayed a solid shot-fake and mid-range game. JB Hoops stormed back in the second half, led by Blair Academy’s Ross Danzig. The 6’5 guard got to the hoop regularly with his strength and athleticism. The run started with a monster and-1 dunk by Terry Turner, who looks like a definite scholarship-level athlete in the class of 2012 out of Scranton, PA. In the end, the Hoopstars held on to win despite the furious run. Papale finished with 23 points. Also playing well for the Hoopstars was Ben Pollack, who is a big, strong, back to the basket player, and Gerald McClease, a strong guard who showed a nice pull-up on several occasions.

Balance was the key for MB Nation as they got good production from a variety of different sources.  Will Defanti led the way with 15 while Alex Furness added 14 to form a potent one-two backcourt tandem.  Defanti showed great composure handling against pressure while driving and kicking to get others shots.  Furness made one three while showing his typical arsenal of spins and step-throughs off the dribble.  Chris Braley was 3-3 from behind the arc for 9 points before going down with an ankle injury while Andrew Shaw continued to play well with 10 points, making shots off the catch as well as the dribble.  Metro Boston was led by their backcourt as Andrej Pajovic, Ronnie Fernandez, and Zach Chionuma all scored in double figures.  Pajovic distributed for others while draining some smooth dribble pull-ups while Fernandez was lethal from behind the three-point line.  Chionuma continued to grow his scholarship interest, with a variety of scoring plays in the mid-range area.  Ultimately, MB Nation held on for the 60-47 win.

A tight game in the first half, the Playaz distanced themselves from MBR in the second half by bullying them inside. With a patient approach in their 4 out 1 in offense, the Playaz methodically picked apart the MBR defense. Markus Kennedy was too much to handle for the Maine bigs with his size and soft hands. The Playaz would move the ball around the perimeter, and then look to lob the ball over the top to Kennedy, who created space and finished off the glass time and time again. Alex Murphy also got it going in the second half, scoring on the wing in transition and knocking down open shots. Murphy finished with 18, and Kennedy had 12. Tristan Thomas paced MBR with 12 points, showing off a quick release and solid stroke. Naadir Tharpe also really looked good at times, making a few special moves off the dribble and orchestrating the offense.

A flurry of threes to begin the second half (including 3 in a row by Ricardo Ledo) gave Expressions a 15-point lead and the squad held on for a victory despite a late push by Metro Boston’s Rony Fernandez. Holding a two-point lead at the half, Expressions came out on fire draining seven three-pointers in the half’s first six minutes. Akosa Maduegbunam, known primarily for his athleticism, showed off an improved stroke by hitting a three on back-to-back possessions to open the half. Maduegbunam finished with a team-high 21 while his backcourt mate Tarik Smith contributed 19 while also controlling the game’s tempo. For Metro Boston, Rony Fernandez did an excellent job getting into the lane and drawing contact. Fernandez was a perfect 8-8 from the free throw line on his way to 21 points.

Two national AAU teams with reputations as high-academic organizations went head to head in the morning session. It was a battle of two very good big men: Luke Piotrowski of NJABC and Kenyatta Smith of BTI. Both posts have attracted a good deal of high major interest this July. BTI controlled the game for the first half, feeding the strong-bodied Smith. He carved out space for himself and finished consistently with a soft touch in the paint to the tune of 17 total points. Meanwhile, Piotrowski made his presence felt more on the defensive end, blocking and altering shots with his great length. NJABC cut the lead to two in the second half, but could never get over the hump. Matt Mounier and Daniel Wuhl played solid on the wing for BTI, moving well without the ball and knocking down open shots when the defense collapsed on Smith. On the other side, Khalid Lewis and Kazembe Abif showed signs of their tremendous athleticism and potential, though BTI did a good job of containing both off the bounce.

After losing in the event’s opening game slot, Metro Boston rebounded with a narrow win over Mid Atlantic Select. The win was keyed by Metro Boston guards Zach Chionuma and Dimitry Coronel. Despite not playing in the first half, Coronell exploded off the bench for 15 second half points. With an outside stroke that defenders must respect and the ability to create his own shot, Coronel showed off his full offensive arsenal. Chionuma’s driving layup with just under a minute remaining put the Boston squad up 53-52 and they survived a Zaid Hearst desperation shot that rimmed out for the win. Raymond Baldwin’s performance had the crowd of college coaches scrambling through the programs to identify the unknown from Maryland. The Mid Atlantic Select swingman had 18 for the game, using his athleticism to attack the rim.