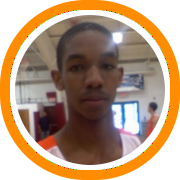 Games continued at a rapid rate throughout the afternoon on Saturday while a number of players continued to help their stock.

Akosa Maduegbunam, Expressions Elite: A player who was once known simply as an athlete, Maduegbunam has significantly improved his skill set since the high school season. Maduegbunam, no longer relying solely on his strength and quickness, has developed an entire arsenal of attack moves. He is at best when bullying smaller defenders on his way to the rim. The jump shot is still under construction, but has also seen major progress in the last several months with his ball showing good rotation as it comes off. Mauduegbunam, a Charlestown High product in the class of 2012, was fantastic in the morning set as his Expressions team prevailed over Metro Boston behind his 21 points.

Raymond Baldwin, Mid Atlantic Select: In one of the most talked-about performances of the morning session, Baldwin, a largely unknown 6-4 wing from Upper Marlboro, Maryland, controlled every aspect of his team’s matchup with Metro Boston. The rising senior who is receiving only slight division 1 interest, had several college coaches scrambling for their programs en route to 19 points. However, it wasn’t so much Baldwin’s scoring that caught the scouts’ eyes, but the way he facilitated every part of the Mid Atlantic Select’s offense. While this ultra-athletic wing needs work on his jumper, his name is one that should be all over low division one schools’ radars.

Kazembe Abif, Team NJABC: As one college coach said when talking about Abif, “playing hard is a skill.” While undersized at the power forward position, Abif gets it done by way of a high motor and an aggressive offensive game. Abif has an attack mentality on every single post catch and no one pursues offensive rebounds better than the 6’5 Lawrenceville Prep product.

Demitry Coronell, Metro Boston: Coronel is an extremely difficult 1-on-1 matchup—the 6-5 guard is equally adept at putting the ball on the floor as he is hoisting it from three-point range. Coronel was particularly impressive in Metro Boston’s win over Mid Atlantic Select when he came off the bench for 15 second half points.

Mark Bevacqua, JB Hoops: A solid post player who uses his thick 6-7 frame to carve out space on the block, Bevacqua is both a decent scoring option on the block and an above-average post defender. Bevacqua, heading into a PG year at Blair Academy, is comfortable playing with his back to the basket with an assortment of post moves at his disposal.  Bevacqua particularly likes to drive it left before spinning back to turn over his right for a soft hook.

-A banged-up ankle and the flu didn’t stop Tyler McFarland from playing as hard as we’ve come to expect from him.

-The BTI Pump n’ Run team, making the trip out from Los Angeles, runs some of the best stuff (x’s and o’s) you’ll see all summer on the AAU circuit.

-ESPN’s Andy Katz stopped by to check out the action.