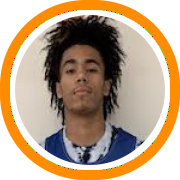 Rhode Island Elite has been a program on the rise in recent years.

The program was founded by Nick Light and Nuri Mahmoud, who played at Mitchell College and Trinity College respectively, four years ago with the goal of bringing back a college exposure team to the Rhode Island area.

With the help of a coaching staff that includes the likes of Ray Pena and Demetrius Robinson, they have just that with now over 40 alums competing at the next level.

The team admittedly competes with a chip on their shoulder and prides themselves on player harder than their competition on both ends of the floor.

The 2018 grassroots season was a breakout campaign for the program as they captured the championship at the Northeast Hoops Festival and went to the Final Four of the Super 16 with both their sophomore and junior teams.

What was your team's biggest collective accomplishment this summer?

“As a team, our best accomplishment was that every player ended the summer with far more college recruitment then they started with and to me that’s always the goal of grassroots basketball.”

Rhode Island Elite also won their fair share of big games including a particularly strong showing at the Hoop Group Summer Warm-Up where they knocked off Philly Pride, an Under Armour sponsored program.

Aidan Carpenter, Lee Academy, 2020 – “Aidan Carpenter blew up this summer. Before joining our program, he had two division I offers and he ended the summer with 20. He took advantage of every opportunity.”

Carpenter trimmed his list to five schools – Akron, UAB, Hofstra, Siena, and South Dakota – and is expected to commit in the very near future.

Devin Butler, Phelps School (PA), 2020 – “Devin is a 6-foot-2 combo-guard doing a PG year at the Phelps School in Pennsylvania. He has a 3.8 GPA and is a kid who just makes winning plays. He’s a guy you want to coach and any program would be lucky to have him.”

Jalen Graham, Hyde; Tyrone Victor, Springfield Commonwealth, & Paul Roche (St. Andrew’s) – “I would have to give this to all three guys. They all bought into our system and the results showed. They are all getting recruited by winning programs across different levels of the NCAA and should have big seasons for their respective prep teams.”

“We were lucky to have three very talented sophomores that played up on our 17u team this summer, Sebastian Thomas, Raymond Espinal Guzman and Josiah Diaz, I’m excited to continue to watch their growth as players and young men. They give us an excellent core to build around for 2021!”