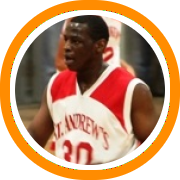 Kalusha Ndoumbe Ngollo has come a long way in the two years since he first arrived at St. Andrew’s School.

Initially, he struggled to adjust to the speed and physicality of the American game and literally had problems staying on the floor because of foul trouble.

Gradually he became more comfortable and developed into more and more of a factor for St. Andrew’s as they advanced to the semifinals of last year’s NEPSAC Class A tournament.

This year, Ngollo returned for his second season as one of the team’s tri-captains and was one of the key contributors behind a repeat run to the NEPSAC semifinals, where St. Andrew’s took the eventual champion St. Mark’s all the way down to the final moments of the game.

Ngollo still owns a good deal of untapped potential with a massive and powerful upper body along with the skill set to step out to the three-point line and make shots.

He’ll follow in the footsteps of another former St. Andrew’s forward, Ndubisi Ezeigwe, who recently completed his junior season at Franklin Pierce after beginning his career at Regis College.