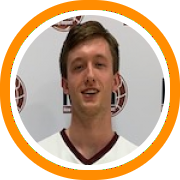 College coaches from some of the nation’s most prestigious academic institutions paraded into the gym at Babson College this weekend for the annual Scholar Roundball Classic.

A number of unsigned seniors seized the opportunity that the big stage provided, standing out as some of the best unsigned seniors in the event and surely helping their recruitment in the process.

Here’s a look at who helped themselves the most in the class of 2020.

Sam Towns, Winchendon – Towns has been on a tear to start the season and picking up scholarship offers at a rapid rate because of it. The Ohio native is approaching 6’9” with a wiry build and an advanced skill-set. He scores in different ways, shoots it with range, and has a unique ability to shoot off the dribble at his size. He went for 27 on Friday night including the go-ahead three-pointer with under a minute to play.

Ben Callahan-Gold, NMH – If you’ve watched Callahan-Gold over the course of the 16 months you know there might not be another shooter in New England who can heat up from three quite like him. When he gets going, he can put his team on his back and immediately change the complexion of a game. He did it in last year’s NEPSAC final, he did it at the NEPSAC June scholastic event, and he did it again on Sunday in NMH’s win over Loomis.

Jahmyl Telfort, New Hampton – Andrew Gale has the Huskies ahead of schedule in his first year at the helm of the program and the productivity and reliability of this Canadian import is a big reason why. Telfort is powerful with a college ready body and has adjusted seamlessly to a more signature role, proving he’s capable of taking on more of the offensive load and scoring in different ways on demand.

Giovanni Rubino, Cheshire Academy – One of the best reasons to take a post-grad year is to get an extra year of physical development. Think scholarship caliber game with an undeveloped frame. Rubino fits that mold and he showed it this weekend. He’s skilled, knows how to play, and even has pretty good size. He hasn’t filled out yet, so the projection requires some foresight, but he’ll be better than most expect when his body catches up.

John Adams, Wilbraham & Monson – The most under-recruited characteristic in the country is character. Talent is always a requisite, but when a prospect has both, their floor (meaning their worst-case scenario at the next level) is very high. Adams is a competitive hard-worker with adequate size and athleticism and an every day mentality. He’s the type of guy that adds value to a program, rotation, and locker room at the next level from his first day.

Cooper Creek, Williston Northampton – Creek had division II offers on the table coming out of his senior year at Bishop Connolly and picked up his first division I offer over the summer. That’s the good news. The bad news is that reported recruitment seems to have scared off other potential suitors and anyone looking for a shot-maker in the frontcourt with a developing passing instinct needs to give Creek a long and hard look.

Zach Lezanic, The Hill School – He may not be from New England and he didn’t even put up huge numbers this weekend, but nevertheless, Lezanic stood out as the best available true point guard in the event. Why? Because there aren’t many true point guards left. His intangibles are the type that permeate throughout the team and when you add that to his ability to play-make and distribute, he makes his teammates better in a multitude of ways.

Niko Rocak, Phillips Exeter Academy – Rocak was often hurt or playing through injury for the better part of his first year in the US. He looked fully healthy and playing at an unprecedented level this fall in Exeter’s open gym and has maintained that level to start the season. He’s moving well, stretching the floor consistently, and showing off the full scope of his skill-set within Exeter’s offense.

Sam Adusei, St. George’s – Simply put, he had the best, high profile, game of his career on Sunday and it didn’t look like a fluke. Going head to head with AAA New Hampton, Adusei was the best guard on the floor for stretches at a time. He scored an efficient 23 points, got his shot in different ways, and was locked in defensively. He’s also built-up his body while maintaining his quickness on both ends.

Josh Odunowo, Perkiomen – Thomas Baudinet’s most recent return to New England was a glorious one as the former Taft and St. Anselm star led his club on the sideline to a pair of convincing wins. Odunowo was a major contributor throughout. A high-motored, long-armed forward who plays bigger than he is inside and has the tools to defend multiple positions, he also showed advancements in his offensive game, scoring with both hands in and around the paint.

Matt Mensia, Avon Old Farms – Mensia has great perimeter size, a strong body, the ability to play through contact, and score at multiple levels. He went for 27 points on Sunday night while showing the full range of his offensive versatility as he got to the rim and made threes off both the catch and the dribble. He was under-the-radar upon his arrival to AOF but should now be a name getting some traction with college coaches.

Jay Rodgers, Winchendon – He arrived in New England with a D1 offer already to his name and incredibly hasn’t added any other despite scoring the ball in high volume at virtually every step. It’s undoubtedly only a matter of time though if he keeps up what he’s doing. The lefty has been nothing short of a walking bucket. He’s scoring in different ways, at multiple levels, and showing off a strong body in the process.

Wol Maiwen, Williston Northampton – Maiwen’s athleticism made him physically dominant throughout his high school career in Maine, but when he left the state’s borders he didn’t know how to adjust to higher levels of competition. That’s all starting to change now as he’s learning to slow down, pick his spots, and developing his skill-set while his quick twitch athleticism still sets him apart even at this level.