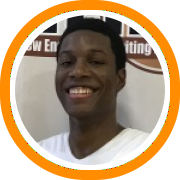 Following Friday’s night’s Coaches vs. Cancer Classic the action continued on Saturday with the opening of the 6th annual Scholar Roundball Classic. With a good crowd early on and plenty of college coaches from the very first tip, this event continued to live up to the billing of its predecessors as a showcase of some of the top academics prospects and programs in the entire country.

Knox returned to the court less than 12 hours after Friday night’s loss to St. Luke’s but looked like a brand new team as they came out with energy right off the bat and set the tone from the jump. Kareem Holmes earned Player of the Game honors with 19 points and 4 assists but the team demonstrated a wealth of scholarship prospects before getting on the bus back to Long Island. Wassef Methnani and Omar El Eheikh both proved to be under-recruited prospects in the frontcourt as both have improved their bodies since the summer and offer versatile skill sets. Methnani had 19 up front while Laurynas Stonkus had 12 in the backcourt, showing flashes of his athleticism and playmaking. A.J. Reeves did his best to carry the Gators back in the second half, cutting the lead to 10 at one point, and finishing with a game high 35 points with Boston College and Northwestern on hand to watch him. The backcourt tandem of Jimmy Yfantopulos and JuQuan Mills showed well with 16 and 11 respectively while Stone McLaren paced the frontcourt with 11.

Rivers jumped all over Andover in the opening minutes, starting the game with a decisive 20-4 run, but Phillips Academy proved to be a resilient bunch and continued to chip away through the vast majority of the second half. Yale bound guard Azar Swain was sensational with 26 points on a series of his typical deep jumpers and tough finishes around the rim. Villanova bound forward Jermaine Samuels had 12 but set the stage for Andrew Snoddy and Ethan Lemley to both have breakout performances. Snoddy showed a ton of bounce around the rim along with a versatile skill set to develop in the coming years while Lemley, just a sophomore guard, impressed with his intellect for the game. Despite the loss, Andover big man James Lewis still had a breakout performance of his own with 19 points on a series of short face-up drives and athletic finishes. Freshman guard Dallion Johnson showed glimpses of his bright future as well, rattling off 7 consecutive points at one stage, and finishing with 15.

NMH head coach John Carroll, presumably displeased by two early losses, changed his starting line-up and sent many of his seniors to the bench to start Saturday’s game. The message was clearly received as the defending AAA champs jumped out early and didn’t take their foot off the gas for all 40 minutes. 12 different players got into the scoring column before it was all said and done. Nate Laszewski led the way early with five threes in the first 15 minutes, before finishing with 19, but it was Northeastern bound forward Tomas Murphy who was perhaps most impressive. Murphy showed range out to the arc, operated inside, and even got out to fill lanes and finish explosively above the rim. Kai Toews, who got his first start of the season, showed well at the point guard position, scoring 8 points but also handing out numerous assists. Seniors Jerome Desrosiers, Andrew Platek and Matt DeWolf all contributed 8 each in limited minutes as well.

The Tigers came out intent to make a statement from the opening jump and they did just that as they were able to open the game on a dominant run. Milton gradually chipped away but ultimately Suffield’s depth and defensive effort was too much to overcome. Unsigned senior Tyreek Scott-Grayson earned Player of the Game honors, scoring 24 points for Suffield while showing his length and smoothness. Junior forward R.J. Mhoon was a major spark plug, sprinting rim to rim at every available opportunity and adding ten points while freshman guard Jalin Sinclair knocked down a three threes and a free-throw for 10 points. The real story for Suffield though was on the defensive end as they held Cormac Ryan to 18 points, making him work for every look he had. Fellow junior Cameron Shockley started to make a name for himself, chipping in 15 points while showing good perimeter size, long arms, and three-point range.

In what was an extremely well-played game by both sides, Exeter scored a dramatic comeback win after trailing by as many as 12 late in the second half. Kyle Copeland and Javante McCoy, who are both headed to the Patriot League at Holy Cross and BU respectively, combined to score 27 second half points to fuel the comeback. It was a Copeland corner three that finally gave Exeter the lead with under two minutes to play. Senior captain Mitchell Kirsch iced the game by knocking down a pair of free-throws with five seconds left on the clock. He finished with 10 points as too did Jacob Grandison. Hill School was led by Chase Audige, a strong and athletic junior guard who curled screens and attacked the rim to the tune of 18 points. Unsigned post-graduate Colton Lawrence added 10 points while showing off a college ready body of his own along with deep shooting range.

KUA and Blair went back and forth for the first 18 minutes but ultimately the talent and discipline of Blair proved to be too much as they pulled away in the second half. Anthony Mack, a player who spurned high-major recruitment to commit to Wyoming this fall, earned the game’s MVP honors but the Blair attack was one of balance as Tennessee bound big man Zach Kent had 13 and Miami bound big man Deng Gak had 12. In total ten different players scored for Blair, while their defensive efforts were perhaps even more impressive. Uginius Zilinskas and Spencer Cline both scored 12 points for KUA while Duje Rada added 10. Together that trio formed a terrific frontcourt unit that will only benefit by the return of Eze Dike, the first year junior point guard who is currently out of the line-up with injury.

Cushing Academy knocked off a AAA foe for the second time in the last ten days in a highly competitive and entertaining match-up against New Hampton. The Huskies were playing without their floor general, Kristers Zoriks, and it showed as they were rattled by Cushing’s intensity and defensive energy at numerous points in the game. Wabissa Bede scored a team high 19 for the Penguins, including a number of big shots down the stretch, but far more important than any statistics is his leadership and and ability to will his team to different levels. David Duke scored 18 points and had some moments of clear stardom as he is ascending at a rapid rate so far this season. Greg Kuakumensah added 8 but was huge on the defensive end, holding Kimani Lawrence to 12 and staying attached to him from start to finish, while Francis Uzorh hit some timely threes as well. Shandon Brown led the Huskies offense with 18 points, including some of his trademark threes, while he and Anthony Gaines shared the point guard responsibilities.

Holderness led for the vast majority of the game but Cheshire kept it close enough to give themselves a chance late and ultimately earned the decision with a late run. Philmon Gebrewhit was at his best in the first half, making tough jumpers off the dribble but also mixing in some tough drives and finishes, en route to a 25 point night. Unsigned senior forward Daniel Cabassa also had a terrific night, finishing with 18 points, including athletic finishes with both hands and signs of his increasing face-up shooting range. Sukhmail Mathon also scored 11 while battling Chol Marial on the defensive end and holding him to just 6 points. Jairus Stevens was the standout for Cheshire, not just scoring a team high 21 points, but also knocking down a critical corner three-pointer down the stretch of the second half. Post-graduate point guard Rich Kelly continued his strong play this season as he also finished with a team high 21 points including three three-pointers.  Deng Nhial chipped in with ten points for Cheshire.