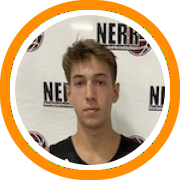 He's been a Catholic Conference All-Star in each of the last two years, was named MVP of the Commonwealth Classic, and was named his team's captain and MVP as a junior.

On the recruiting front, Callahan has already heard from numerous coaches at the division III level, but with his game continue to expand at a very consistent rate, he's currently focused on trying to prove he can play at the scholarship level in the Northeast 10 Conference.

He has already heard from numerous college coaches at the division III level but is focused on trying to prove he can play at the scholarship level in the Northeast 10 Conference.

I would like all coaches to know that I always strive to make the best play for the team overall and I give 100% to every aspect of the game, in order to get the win. I am a high IQ, true point guard that plays both ends of the floor intensely. Through scoring and assists last year I accounted for 30 points per game in a tough D1 Catholic Conference. I have a tight and crafty handle which allows me to get to the rim with ease, and can knock down the three as well. I'm always thinking about and trying to learn basketball, on and off the court along with trying to improve my game and strength as much as I can. My high IQ allows me to read and see plays a second before they happen on both the offensive and defensive side of the ball. I take a lot of pride in my defense, often giving our team a much better chance to win by shutting down or frustrating the other team's best player. I am never outworked and my strong effort and positive attitude leads to consistent contributions that my teammates and coaches can count on.

"Aidan has always been a very unselfish and team oriented player from the time I met him, but perhaps what he does best on the floor is play tough in your face man to man defense. In my opinion, he is one of, if not the best on ball defender in Eastern Massachusetts. Aidan has been instrumental in the success of our program the last few years. As a two year starter heading into his senior year, Aidan will be one of few St. John’s players in recent history to start for three years while also being a two time captain. He is the ultimate lead by example player. He sets the tone with his style of play and no nonsense attitude. He led our team in points, rebounds, assists, and steals this year as he showed his versatility while usually covering the opposing team’s best player. Aidan’s future is very bright and will make a great addition to any school he plays at."
- John Dullea, Head Coach, St. John's Prep

“Aidan Callahan is a high IQ combo guard who makes all his teammates around him better. He is crafty with the ball, a strong passer with a very improved outside shot. His ability to probe and get teammates the ball in the right spot is strong. Defensively Aidan is a very good on the ball defender with a great ability to keep his man in front of him. Off the ball he reads an offense very well. He is a coach's dream and a real gymrat. Aidan has greatly improved as a basketball player over the the last 18 months and I honestly believe his best days are ahead of him.”
- Rick Gorman, BST Basketball Training

'He has a feel.' 'He knows how to play.' These terms are in the common vernacular of most college coaches, and yet are often understood by most parents and fans. Essentially, they mean that players instinctively understand the right play to make, or the right place to be, at the right time. They are smart and efficient. Aidan Callahan is one such player, and you can see it even when watching film. He has a developed basketball I.Q., understands many nuances of the game, and is consequently a reliable decision maker. More than that, he's a worker according to all accounts, so his physical habits match-up with the mental aspects of the game. He's an excellent defender, solid playmaker, valuable perimeter rebounder, and evolving shooter.