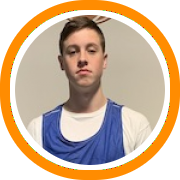 Project Triple Threat was established in the summer of 2016 by former D1 assistant and current prep school coach Drew Dawson.

Their mission is to facilitate player and personal development while assisting with exposure and the college recruiting process.

Specifically, that entails reinforcing fundamentals and developing individual skills, but doing so within the confines of team principles in order to foster a college-type, highly competitive, environment that prepares their kids for the next level.

Simultaneously, the program has grown from what began as a small start-up to one of the most respected and well-coached programs in the area.

This year’s roster is again flush with prospects for all three levels of college basketball while the 2022 class could potentially be one of the club’s most competitive teams yet with a trio of talented true seniors contemplating the post-graduate route.

Ethan Okwuosa, Cheshire Academy – Okwuosa has come up the ranks in a PTT jersey and, as we noted in the Cheshire Academy recap, his growth in the last three years has been immeasurable. He’s credited, and rightfully so, for his maturity as virtually everything about him is college ready. But what you see here is a glimpse of how rare his physical tools are when you combine his length, athleticism, and newfound strength. He was playing above the rim with ease and showing his explosiveness in the open floor.

Jack Hall, Avon HS – Hall made a major impression when he watched. In a gym full of guys who could make shots, he set himself apart from behind the three-point line. While he’s a rising senior who’s already scored a ton of points for Avon, he’s also exploring a post-grad year and in 2022, he should be on a scholarship track if he can build up his body and be a focal point of next year’s PTT squad.

Ty Calloway, Enfield – Like Hall, Calloway too is another player expected to investigate the post-grad route, and that could propel his recruitment to the next level. He was already one of the most impactful players in the gym though, combining a strong build with athleticism at the rim and shot-making ability from the perimeter.

Noah Delorme, Choate Rosemary Hall – Delorme was another prospect to grab our attention. He has a beautiful shooting stroke and virtually pure release with still untapped upside to his frame as he continues to add muscle mass. His energy level though is what really differentiates him. He competes, keeps balls alive, rebounds from the perimeter, and is always communicating and leading by example.

Kevin Baxter, Choate Rosemary Hall – A skilled wing with good perimeter size, Baxter has a nice shooting stroke of his own and good understanding of the game at 6-foot-4. His high release helps him to get his shot off in tight spaces while his overall basketball I.Q. makes him an ideal fit for offensive structure at the next level.

Jack McDonnell, Sheehan HS – McDonnell is a third senior contemplating a post-graduate option. He can shoot the ball from distance, but what was most impressive about him was his basketball I.Q. He moved with the ball extremely well and was one of the best off-ball cutters in the gym.

Nick Donofrio, Hand HS – Donofrio is a compact and powerful player on the wing who can physically body up with bigger players and potentially defend multiple positions as a result. Offensively, he makes shots out to the arc and has been well school as to how to play.

Kevin Dunn, Choate Rosemary Hall – Dunn is skilled, strong, and extremely heady. He’s a solid shooting threat out to the arc with a high-released stroke and able to produce around the lane with broad shoulders and good patience. There wasn’t a player in the gym though who made better use of their shot-fake, with the requisite poise to capitalize.

Ethan Doherty, Hamden Hall – A coach’s son, Doherty has made nice strides in his game in recent years. He’s built up a strong and compact body while he too is capable of making shots, and even making them in bunches once he gets going, from behind the three-point line.

Will Soucier, Avon – An undersized southpaw forward, Soucier impacts the game with his savvy and craftiness. He was physical inside, made some nice passes, and found ways to score including a couple of face-up drives and baby hooks around the rim.

Jack Johnson, Choate Rosemary Hall – Johnson is a big wing with some legitimate guard skills. He shoots the ball well from long-range but also gets good lift into his pull-up. He handles and passes efficiently within the flow of the offense and is seasoned with the ball across the board. He also has broad shoulders and a strong frame to potentially keep growing into.

Cole Wissink, Cheshire Academy – His broad shoulders, long-arms, and cut-up frame distinguish him right away, but beyond just the look test, Wissink is productive on both ends of the floor. He’s an advanced defender for his age while offensively he can absorb contact off the dribble and has a soft touch on his shot from three.

Tyler Favre, Daniel Hand HS – At 6-foot-6, Favre is an intriguing prospect because he has signs of inside-out tools and is still a long way from a finished product physically. He has very good footwork inside, can handle the ball well for his size, and so there are certainly long-term tools to develop in the coming years.

Rhandyn Bair, Northwest Catholic – He may be undersized right now but he’s as quick as he is fast, able to get wherever he wants on the floor, and be equally impactful on the defensive end of the floor. He can pressure the ball for all 94 feet, get into the lane on demand, and has a quick released floater to rely on around the lane.

Max Fradkin, Pomperaug – Another young guard, while Fradkin hasn’t evolved physically to the same level as the upperclassmen just yet, he didn’t back down from anyone. He was scrappy from start to finish and able to hold his own.

Morgan Veth, Daniel Hand HS – Veth has good perimeter size and a solid build with broad shoulders. As he continues to develop his fundamentals and overall understanding of the game, he should be on his way to being a legit college prospect.