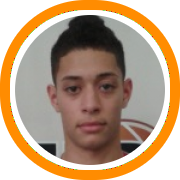 The last time Worcester Academy took the court, they were opening the NEPSAC play-offs as the top seed in Class AA, but went on to suffer a disappointing loss at the hands of the 8th seed St. Andrew’s.

This year’s team will have a much different look and feel, with perhaps not as much individual talent or experience, but arguably more collaborative toughness and cohesiveness.

The 2014 class in particular seems to be united by a common theme – a desire to prove the naysayers wrong.

Returning seniors Matt Cimino and Devon Williams likely reflect that as much as anyone on the roster.

Cimino is as good of a shooting big man as you’ll find anywhere in the country and yet his recruitment has been an up and down ride over the last year or so.  After years of complimenting other star prospects, this season is his chance to write the final chapter of his own story, not only proving his ability but also solidifying the recruiting status that his talent dictates.

Williams is a similar story.  He’s been an under the radar guy for most of his career, but relishes the opportunity to play an important role for this year’s team and has had an incredibly successful pre-season as a result, elevating his recruitment in the process.

Tyriek McCauley and Jameilen Jones are two other 2014 products with something to prove as well.  Like Williams, McCauley is a returning senior looking forward to playing an increased role while also showcasing his explosive power and leaping ability.  Jones is a post-graduate from Boston College High School and an equally high level athlete with speed and quickness alike, not to mention an expanding offensive game.

Another post-graduate, Sage Usher, fits in with his new teammates as a hard-nosed and tough guard who will contribute on both ends of the ball, while big man Sam Joquin provides a physical interior presence and willingness to do the dirty work.

While the team’s seniors and post-graduates are likely to be the heart and soul of the group, Worcester will also benefit from the addition of two talented underclassmen.

Repeat junior Nick Pasquale has improved by leaps and bounds within the last year and continues to do so at a rapid rate.  He’ll have every opportunity to step right in as the team’s starting center and should be poised to make an immediate impact.

Haverhill transfer Saul Phiri is a true sophomore and one of the younger players on the roster, but one who will be counted on to contribute immediately as arguably the team’s most skilled and versatile offensive threat.

There’s plenty more depth to be had on the roster with guys like Tom Mangautis, Chris Capazzoli, Sheldon Matalon, Quentin Bullen, Emmanuel Anderson, and Justus Harris all capable of see minutes inside the rotation.

In short, this year’s Worcester Academy team might not have as many big names as they did a year ago, but what they do have is a group of guys who compete with the fire and intensity reflective of their head coach Jamie Sullivan, and a collect mission to make their presence felt this year in Class AA.