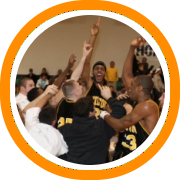 The Tilton School had a dream season last year claiming their second consecutive NEPSAC Class B championship and then making a Cinderella story run to the National Prep Championship title.

It is probably impossible for this year’s team to live up to that level of achievement, but truthfully we may never see another Class B team capture the national championship.

With Alex Oriakhi and Jamal Coombs-McDaniel departing for the University of Connecticut, Scotty Tavares heading to UMass Lowell, and a series of other important seniors also graduating, this year’s Tilton team is a far different group.

They still return Gerard Coleman, arguably the best pure scorer in the region, but Coleman faces a unique challenge this year as he’ll have to assume a position of leadership and prove he can still score in high volume when being the focal point of opposing defenses on a nightly basis.  We fully expect the Providence bound swingman to be up to the challenge as he has exceeded expectations at every stop in his career and proven himself to be among the nation’s best.

Beyond Coleman, this team’s strength may lie on the interior where they have the luxury of rotating four potential scholarship level players.

Repeat sophomore Georges Niang is the lone returner from last year’s squad and the six-foot-seven forward looks poised for a big year as he’s grown a couple of inches, gotten himself into better shape, and established himself as a consistent scoring presence with his back to the basket.

Ryan Canty is the team’s most important newcomer, and figures to replace Oriakhi at the starting center position.  While it wouldn’t be fair to compare Canty to his predecessor, he may actually be able to anchor the team defensively in the same way by providing a physical interior presence, dominating the glass, and blocking shots around the rim.

Speaking of Oriakhi, his little cousin Goodluck Okonoboh has arrived at Tilton just in time to keep the family tree intact.  The young big man is one of the top freshmen in New England and has an exceptionally bright future.  He’ll have the luxury of being brought along slowly this year with so much interior depth but will no doubt prove his worth at several stops along the way.

Alex Stoyle arrives as a post-graduate from nearby Goffstown High School and is one of the more underrated big men you’ll find in the region.  He will be the team’s most versatile big man and is capable of impacting the game in a number of different ways with his relentlessness on the glass, high motor, and ability to shoot and pass the ball from the perimeter.

Jeff Adkins, a post-graduate from New Jersey, has drawn division II interest this fall and figures to step in and inherit the point guard responsibilities from Tavares.

Another local product, Will Bayliss from Manchester Central, will provide plenty of competition at the point guard position and also gives head coach Marcus O’Neil the option of playing with two ball-handlers in the backcourt at the same time.

Both Bayliss and Adkins looked sharp the day we were in the Tilton gym as Adkins pushed the ball hard in transition and showed a clear weapon with his mid-range pull-up, while Bayliss demonstrated the same toughness, headiness, and dribble penetration we’ve come to expect along with an improved jumper from the perimeter.

Jeremy Driscoll could be the big surprise of this team.  The six-foot-four swingman has good size for the swing positions, the athleticism to get out and finish plays in transition, and the sweet shooting stroke to spread the floor and create space for Coleman and the big men to operate.

A third local post-graduate, George Tsougranis from Portsmouth, will provide versatility off the bench.  He’s slimmed down and extended his shooting range since last season and was extremely efficient on both ends of the floor and rebounding the ball when we watched.  Yuqiao Xing is a six-foot-two senior who could also crack the rotation for Tilton.

Ultimately, the 2008-2009 season may be one that is impossible to duplicate, but what it did was set the precedent of excellence for Coach O’Neil’s team moving forward as they strive to take their third consecutive NEPSAC Class B title.