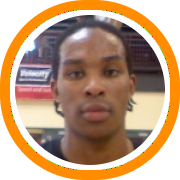 In order to win the Class B tournament Marianapolis Prep will have to be able to beat the Tilton School and their three headed monster of Alex Oriakhi, Jamal Coombs, and Gerard Coleman.  Marianapolis head coach Dave Vitale knows that and has built his roster accordingly.

While shutting down Tilton’s top three might be a near impossibility, you need defenders who can contain them.  With the additions of 6’7” big man Noel Jones, 6’6” forward Josh Vital, and 6’1” guard Justin Duvarney, Marianapolis will have as good a chance as anyone.  All three have good size, strength, and length which should allow them to be very productive on the defensive end of the floor.  Jones is built like a linebacker with tremendous upper body strength, Vital has the body of a big man and the mobility of a guard, and Duvarney a tremendous ability to pressure and contain opposing ball-handlers.

Chris Flores is a longtime New England native who is also in his first season at Marianapolis.  He is another good perimeter defender as well as someone who can put points on the board on the offensive end by attacking the rim and making open shots.

Corey Wright Jr., now in his second year at Marianapolis, is the team’s most talented offensive player as well as the prospect generating the highest levels of recruitment.  He will be the team’s most prominent creative force, generating shots for both himself and his teammates.  But he will also need to balance that with his responsibilities at the point, as he will be depended on to run the team.

Reuben Cabrea is another guy who should serve as a big weapon on the offensive end of the floor.  The 6’6” senior big man has good versatility and is equally comfortable scoring around the basket or stepping to the perimeter and extending the defense with his shooting range.

Marianapolis has another noticeable asset, and that is their depth.  Dave Vitale’s group has ten legitimate college prospects in their rotation and that should provide him with a major advantage over the vast majority of other class B schools.  6’5” senior small forward Toso Adebamowo, 6’5” senior power forward Ryan Lehane, and 6’3” post-graduate swingman Mickey McEntee will all play important roles this year before continuing their careers at the college level next season.  6’5” freshman forward Mike Neal is a bright young prospect who appears ready to see important minutes in just his first year on the job.

When it is all said and done this is a team who will be better then the sum of their parts.  They may not have multiple high-major players on their roster, but they may not need to.  What they do have are ten future college basketball players who all bring something unique to the fold.  Marianapolis will have no problem putting points on the board, but perhaps more importantly, they could be class B’s best defensive team.  Whether or not that’s enough to make this the year they get over the hump and conquer their championship aspirations, only time will tell.