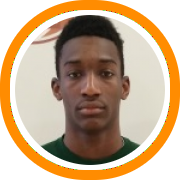 Brimmer & May’s basketball program went through a revitalization of sorts last season, rebounding from a disappointing 2011-2012 campaign and relying on a late season run to score a play-off berth in the highly competitive Class AA.

To put that accomplishment in perspective, consider this – Brimmer & May is a local day school, unable to recruit both boarders and post-graduates, and playing against an entire league full of teams that typically rely on both to be successful.

As is so often the case, the team’s collective success spurned individual rewards for a number of seniors with Jake Fay, John Powell, and Adrian Oliveira all securing scholarships.

This season, head coach Tom Nelson’s club is looking to build off that momentum while replacing those now departed seniors.

Drexel bound guard Sammy Mojica Jr. now steps into the limelight as not just the team’s top player, but also a jack of all trades for the club.  He’ll serve as the team’s captain as well as their primary playmaker, best perimeter defender, and one of their top rebounders.

Fellow senior Quinn Iuliano will serve as the team’s co-captain and see consistent minutes inside the rotation where he’ll contribute with his consistent three-point shooting and fundamentally sound game.  Calvin Alexis and Dietrich Pultinas are two other seniors who hope to contribute this season.

Andrew Simpson headlines the junior class in his second season at Brimmer & May.  The six-foot-five swingman is playing with a lot of confidence and looks poised to turn in a big season after a very strong fall open gym season.

David Labossiere and Bobby Brooks are two important newcomers in the 2015 class.  Labossiere is another explosive athlete and likely to start alongside Mojica in the backcourt, while Brooks will help fill the role that Fay left vacated as the team’s shooter and floor spacer.  Keenan Iuliano will also help in that role after working his way up from the varsity 2 team.

A pair of repeat sophomores are likely to hold down the frontcourt in Catholic Memorial transfer David Watkins and Brookline transfer Mark Gasperini.  At six-foot-six, Watkins is a major mismatch problem who can play a variety of different positions on the floor, while the six-foot-nine Gasperini is a true big man with inside-out tools and a rapidly developing game.

In total, this year’s Brimmer & May team will have a lot of new faces, but a very similar mission, as they look to defy the odds by making another run at the post-season in a Class AA league that is deep as it is talented.