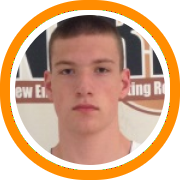 Worcester Academy unsigned senior big man Nick Pasquale came off the board on Thursday with a commitment to hometown Assumption College.
The news was tweeted by both Worcester Academy head coach Jamie Sullivan and assistant coach Dan Sullivan.

The 6-foot-11 southpaw big man had been consistently recruited at the division I level for the better part of the last two years, but was limited by injuries throughout most of his senior season.

He joins his Worcester Academy teammate Jeff Spellman, to become the second Hilltopper to commit to a Northeast 10 Conference school in as many months. All five members of Worcester’s 2015 class have now solidified their plans for next year with Patrick Benzan heading to Holy Cross, Ben Marello to Henderson State and James Loring to WPI.

For Assumption first year head coach Michael Harding, Pasquale not only provides a division I caliber talent, but the type of size and interior presence that typically doesn’t exist in the NE-10.

For Pasquale, a big man who has rapidly improved in the last few years, he now gets an opportunity to stay close to home for the next four years while continuing to take his game to new levels.