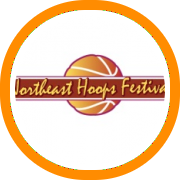 Keeping up with the action was nothing short of a daunting task on Saturday morning as the Northeast Hoops Festival kicked into first gear.  Here’s a look at a few of the guys who stood out early in the day:

Mike Neal & Kristian Medina, Rhode Island Breakers – A tough inside out tandem with plenty of continuity after sharing the court at Marianapolis earlier this year.  Neal is strong and athletic around the rim, able to overwhelm opponents with his physical tools, and Medina a tenacious wing player with a versatile offensive tool set.

Matt Daley & Devin Mehra, Academic Basketball Club – The ABC program had two notable standouts on Saturday morning.  The first was Matt Daley, reportedly headed to prep school next year, who impressed with his length and athleticism at his size along with a developing face-up tool set.  Mehra went off from behind the three-point line, connecting on seven three-pointers in a single game including four in a row in the first half.

Dwayne Richardson, CSA Velocity – A previously unknown product who managed to make a name for himself on Saturday as this scoring guard showed an ability to put the ball in the basket in a multitude of different ways.  He did damage with his dribble early, showing quickness and creativity, and got the jumper heated up later in the second when defenders began to play off him.

Arkel Miles, Connecticut Gold – Notre Dame’s power forward impressed for the second consecutive day but this time it was on the defensive end as Miles stood out with his ability to stand his ground and pick up multiple chargers when rotating from the weak-side of the floor.

Jaymie Spears, Mass Elite – Spears is sporting a powerful frame with his trademark scoring ability.  He drove the ball through contact, showing athleticism and body control to convert a variety of acrobatic finishes.  He was equally creative in the half-court as he was in transition as his defender simply couldn’t keep in front of him.

Jason Hall-Sergenton, New England Balls – A high level athlete from West Roxbury, Hall used his size and quick bounce to dominate the game in the paint.  He made a late arrival just after halftime and the game immediately changed as he went on to score 11 points and lead his team to victory.

Justin Pollard, Team Maine –Thornton Academy’s guard stood out with his high basketball I.Q. and work ethic.  He had a good motor on both ends of the floor, instinctive feel for the game, and the fundamental skills to make high percentage plays and open shots.

Kenny Armstead, East Coast Elite – A tall glass of water who can be in two places at one time because of his length, Armstead was all over the court on the defensive end.  Tallying 5 blocks and double digit deflections, Armstead not only frustrated the opposition but also sparked his team’s transition attack.

Gunner Bjornson & Robert Lewis, Rhode Island Hawks – An imposing perimeter tandem that controlled the game for the Hawks, Bjornson and Lewis both had highly impressive performances.  Bjornson played the part of a big guard who not only knocked down four trifectas but also handled the ball and drove hard to the basket.  Lewis was getting the ball to the rim at will, showing good burst with his first step, and a pull-up game to match.

George Logan & Tyler Anglin, Shoreline Shooters – The duo combined for 60 points and proved too difficult for the opposition to defend.  Logan, who plays at Old Lyme, put on a show late in the game, converting five three-pointers in the second half while Anglin was a pillar of consistency, scoring inside and out throughout the game.

Dante Thompson, Connecticut Elite – A big man from St. John the Baptist in Long Island, Thompson is reportedly heading to New England for prep school next year and made a big first impression on Saturday, showing bouncy athleticism inside the lane for a handful of powerful dunks and blocked shots.