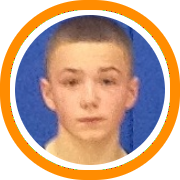 - Known as the Money Team, the CBC 7th Grade Team has earned themselves quite an audacious nickname to say the least.  But so far this spring, they have more than defended the Money Team title against any accusation of audacity. After cruising to the Championship this weekend at the Northeast Hoops Festival, Reggie Hatchett's Squad is now 3 for 3 on the spring trophy hunt and undefeated thus far this spring.  In addition to Azar Swain, DeAndre Leslie, Shyheim Hicks, and Jared Simmons, (who we saw at the Elite 75 last month), this loaded wagon also features the likes of man-child Ismail Charles, the dynamic brotherly back-court of Jaecee and Chaylyn Martin, pogo-stick forward Kareem Harvin, and hard-nosed bull forward Vincent Ruff. Stay tuned, as we will be following CBC 2017 closely all spring on the road to Memphis.

Players
Ismail Charles (CBC)- Man-Child who rebounds everything and uses his strength and athleticism to go to work in the paint.  IC is a physical specimen who has cumulous cloud potential as an athlete.

Jaecee Martin - Was our first look at Mayweather and frankly, it was difficult to get a tip-top gauge on his flow as the opposing back-court was severely over-matched in going up against Reggie Hatchett's loaded back-court stable. Never-the-less, Jaecee was very impressive, showcasing his tenacious, attacking style on both ends of the floor.  The kid has a mean-streak on the court and is the type of player who takes exception to the fact that opposing guards are trespassing on his turf. Now we see why the Mayweather nickname is a goody-bag sticker.

Chaylyn Martin - Maybe part of what makes Jaecee such a pit-bull is that he knows his older-brother (by 11 months) is right behind him at all times.  Chaylyn is a dangerous featherweight contender on the rise himself, and a player who Hatchett calls the most improved player on the team in the past year. When we saw him on Saturday, Chaylyn was more than content to facilitate for his teammates and let them get the scorebook glory, so we didn’t get a great look at his offensive flow.  Needless to say, quite anxious to get another look at the Martin brothers in a more competitive arena.

Deandre Leslie - Simeon Rice in-his-prime type body, D-Lez screams upside like a church girl who just saw a spider.  Runs the floor effortlessly, all over the glass on both ends, finishes at the cup, alters or blocks a high-percentage of shot attempts by the opponent in the lane.  Keep the night light on...

Azar Swain – Combo-guard who showcased his versatility this weekend; running the offense from the point, finishing around the basket, and unleashing his patented long-range stroke with efficiency.

Jared Simmons - Spread the butter all weekend with his smooth back-court game.  Skills galore and a terrific feel for the sport.  Consistently sets up his teammates for scoring opportunities and will go to work himself when he reads the spacing as appropriate.

Kareem Harvin – Long, athletic, high-energy forward who gets all over the glass.  Exceptionally quick off his feet, finishes around the basket and runs the floor hard with gas-pedal speed.

Shyheim Hicks (CBC)- Smooth wing who tore up the Junior Elite 75 who attacked the rim off the slash from the wing while also going to work consistently from the mid-range with his Moonlight J.

Here’s a look at a few 6th grade pups who made an impression this weekend..

12u
Trever Forbes (CBC)- Sixth grade physical specimen who led his CBC Squad to the #NEHF 12u Championship this weekend.  Excellent handle and very shifty when blowing by defenders. Gets to the basket at will and finishes strong at the hoop.

Dante Griffin (D-Squad) - Crafty young ball-player who really sees the floor from the point guard spot.  Penetrates the defense off the bounce to finish creatively around the rim.