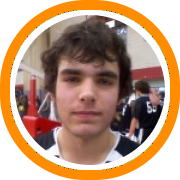 Player of the Week – Carson Desrosiers
First, Desrosiers led Central Catholic to the Comcast Tournament championship earning MVP honors in the process by picking up 29 points, 14 rebounds, and 6 blocked shots in the championship game.  A few days later, he picked up a triple-double in a 62-47 win over St. John’s Prep with 22 points, 19 rebounds, and 10 blocked shots.

Player of the Week – Stepfan Holley, Capitol Prep
The senior led Capitol to their best win of the season as he scored 34 points in a 72-57 win over East Catholic.  In the process, Holley topped the 2000th point plateau for his career.

Player of the Week – James Morse, Thornton Academy
Thornton Academy scored a huge upset on Wednesday night as they defeated #1 Cheverus in the regional semi-finals of the state tournament.  TA’s steady point guard James Morse was right in the middle of their success as usual.  Morse scored 11 fourth quarter points, and finished with 22 on the game, to help solidify the decision.

Player of the Week – John Mulvey, Portsmouth High School
He scored 31 points on 12 of 24 shooting from the floor in an 81-77 win over Hanover.  The performance made him the school’s all-time leading scorer with 1168 career points, breaking a record that was set 24 years ago.

Co-Players of the Week – Ashton Watkins & Levon Waite, Classical High School
The inside out duo led Classical to their latest blow out win over division II competition as they defeated Pilgrim 74-47.  Watkins had 20 points & 22 rebounds while Waite scored 23 points of his own while handing out 6 assists and picking up 3 steals.