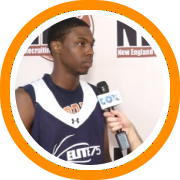 Iverson spent the first three years of his career at Northwest Catholic High School in Connecticut before transferring to Fishburne Military Academy in Virginia to complete his high school career.  He was one of the most celebrated young prospects in the country as an underclassman and regained a lot of national momentum this summer with starring performances at the NBA Players’ Association Camp.

Selden began his career at O’Bryant School of Math and Sciences in Boston, actually competing with the high school team beginning in the seventh grade.  He transferred to the Tilton School, where he has spent the last three years, helping them to a Class AA championship in 2011, as well as winning multiple AAU gold medals, on both the regional and national levels, with the Boston Amateur Basketball Club.

Noah Vonleh began his high school career at Haverhill High School before spending the last two seasons at the New Hampton School.  He led the Mass Rivals to a number of championships last season including the Northeast Hoops Festival and Providence Jam Fest and capped his summer by being named the MVP of Adidas Nations.  Vonleh was also recently named to Team USA’s junior development team.