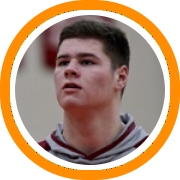 Last spring, when the pandemic first arrived, Gunnery forward Clayton Erickson was one of the players we featured in our NERR-TV Unsigned Senior Showcase.

Erickson went from vastly under-recruited on to Southern New Hampshire.

Coming up the ranks next is his younger brother, Cole Erickson, a junior forward with many of the same physical tools.

Cole has already been contacted by several division III schools so far, but like his brother, is hoping to attract scholarship caliber attention over the course of the next two seasons.

I play within my limitations and understand how to maximize my role in order to best benefit the team.  My strengths now are defense and rebounding.   I feel I'm very good at using my size and physicality to be a presence in the lane on both ends of the court.  I can effectively challenge shots and battle on the blocks for position on the defensive end as well as attacking the glass and maneuvering myself close to the rim for offensive rebounds.

I have developed an effective jump shot to 15 feet which compliments my ability to pass.  My overall offensive game is still developing but I feel pleased with my progress.  Also, I worked with a personal trainer this summer and as a result my mobility has increased in areas such as lateral movement and  vertical jump.

"Cole is an awesome kid and an incredible athlete.  I have been coaching for over 20 years and I don't remember a player Cole's size move as well as he does.  Cole works hard on the court and pushes himself to keep up with the guards in drills and conditioning work.  He swallows up rebounds and is an immovable presence in the post.  Cole has a very quick release and soft touch around the basket.  Playing football has helped his hands and his physicality.  Cole is a natural passer and provides skilled scoring guards an essential option to feed the high or mid post and receive the ball back.  When it comes to setting screens it almost isn't fair as he has literally knocked a kid unconscious with a legal screen.  We play a lot of Princeton style on offense so Cole is comfortable moving around the court and is effective from different spots.  The next evolution to Cole's game will be continued conditioning, shooting and realizing that no one can stop him when he throws his frame around."
- Brian Konik, Head Coach, Frederick Gunn

"Cole possesses gifted size and can hang with anybody in the paint. He is a traditional big who can play with his back to the basket, but also has a good mid-range jumper. He can rebound the basketball and is working hard to get in the best shape he can."
- Greg Swenson, Assistant Coach, Frederick Gunn

Erickson is a long and physical presence on both ends of the floor. He's a high-volume rebounder who has a terrific nose for the ball and will both rebound in traffic as well as outside his area. He can also score second-chance points and generate extra possessions for his team. Offensively, he's extended his shooting range out to 18 feet, has developed a jump hook around the lane, and is a willing passer. Defensively, in addition to his ability to finish possessions, he's a deceptively good shot-blocker with good timing, a rugged interior defender, but also mobile enough to slide his feet on the perimeter. Overall, while he's physically mature, Erickson has expanded his game at each step and appears poised to continue to do so for the foreseeable future.