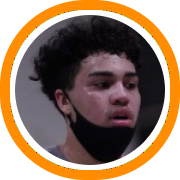 Tareeq Evans is a sophomore guard at Baystate Academy in Springfield who is ready to make a name for himself.

He's a true 10th grader who is still only just 15 years old and put up huge numbers (see below) in his team's first game of the season against Springfield Renaissance.

Moving forward, he's bound to be an ascending prospect in the state of Massachusetts and greater New England region.

"Tareeq is a true 10th grader. He is a strong kids that rebounds the ball very well despite only being 6-foot-2. He is a good shooter and a 3.5 GPA student as well."
- Dion Byrd, Head Coach, Baystate Academy

Evans is a young guard with quality size, a good build, and versatile tools. He attacks the rim aggressively and isn't bothered by contact, allowing him to get to the free-throw line or make plays for himself. He's also a willing ball-mover and quality passer who will make extra passes around the perimeter and find his teammates off the dribble. He has solid mechanics and touch to make him a projectable shooter and is also an active defender and rebounder at this stage.

Evans went for 25 points, 6 rebounds, 5 assists, 4 steals, and 3 blocks against Springfield Renaissance earlier this year, his only game of the season so far.