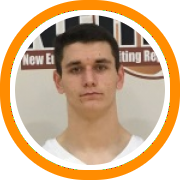 The 2017-2018 season is shaping up to be an especially competitive one in Class B as the overall depth of the group will be significantly higher with new programs like Holderness, St. Luke’s, Greens Farms Academy, and Hamden Hall all joining the field.

The two-time defending champions, Brooks School, remains the favorite though with unmatched experience and depth. Their progression up the Class B ranks has been a straight linear one with Final Four appearances in 2011, 2012, and 2013 followed by trips to the Finals in 2014 and 2015. They got over the hump in 2016 and won even more convincingly last year.

This year, they return a senior core that includes Merrimack bound Justin Connolly, who is among the most efficient big men in the league, and Keigan Kerby, a skilled forward who is now fully healthy and joins with Connolly to create one of the top interior tandems in Class B. Jacob Iwowo, a young senior, is a long, athletic, and active wing who continues to take his game to new levels. Brian Wright-Kinsey provides a southpaw shot-maker on the perimeter while Terrell Brown and Cameron Ray provide experience in the backcourt. If that weren’t enough, junior wing Preston Santos is much improved from last season while Elliot Nelson and Mathias Tankersley are also ready to make contributions in the class of 2019. Sophomore big man Myles Foster provides frontcourt depth and incredible length up front while Olu Oladitan is another young prospect to keep an eye on.

Who poses the biggest threat to Brooks? Here’s a look at some of the contenders…

Marianapolis Prep – Following their Cinderella like run to last year’s finals, Marianapolis returners a core built around junior wing Tyler Burton, who continues to ascend at a rapid rate. The Golden Knights will once again take on an ambitious schedule in hopes of preparing them for another post-season run. Key members of the supporting cast include senior Matthew Chang and sophomore Deandre Ortiz along with the likes of Stephon Baxter, Junior Jusouf, Kevin Le, and Anuar Alpamys.

Beaver Country Day – Seniors Jarred Houston and Jayden DePina give BCD a talented and experienced inside-out duo to build around this season. Houston is a 6-foot-10 big man who has made rapid strides in recent years while Depina is a potent scoring guard who can get hot with his jumper at any point. BCD also has a very bright future with a lot of young talent including sophomore Vondre Chase, freshman Gio Thompson, and 8th grader Shyheim Odom, who is already playing up with the varsity team this year.

Canterbury – Brian Baudinet takes over a program with a proud tradition and the talent to make a run this season. The post-graduate trio of Mike Speight, Kieffer Punter, and Emmanuel Ansong give him three new weapons to join with returners like Kevin Fee, Sean Maher, Shawn Matthews, and Logan ODonnell. Add junior Joe Hoch to that mix and you have a core that has a little bit of everything – size inside the paint, athleticism on the wing, and plenty of shot-making.

Holderness – In their first year in the B ranks, the former AA school has a clear go-to player at this level in Philmon Gebrewhit who is a polished scorer with increasing versatility within his arsenal and one of the best pull-up games in New England. Mitch Orosz provides another veteran presence for the team to rely on while a talented young base features Karl Jeannot and Carter Storey in the sophomore class with freshman guard Muhamed Kante already getting important minutes in the class of 2021.

Rivers – The 2016-2017 season was the end of an era at Rivers as both Jermaine Samuels and Azar Swain graduated. 2017-2018 is the beginning of a new one though as Rivers has arguably the best freshman class in New England with Terrence Clarke, Camaron Tongue, and Jarrell Okorougo. Clark is ready to dominate games from day one while Tongue has also put up big numbers. Tyler Aronson and Andrew Snoddy, committed to Tufts and Bates respectively, are providing senior leadership while juniors Kyle Butler, Ethan Lemley, and Liam Regan are ready to contribute as well. Sophomore Jay Dieterle provides yet another young prospect with a bright future who is already able to make a strong impact.

Hamden Hall – Longtime college coach Sean Doherty has taken over the reins of the Hornets program and brought in a trio of juniors to build around. Hillhouse transfers Christian Adams and Byron Breland should be two of the better players in the Class from day one with their size, strength, and athleticism. Tim Dawson provides an imposing physical presence at the point while senior Andrew Rice is another high level athlete. Jahkai Pettway and Corey Walters give the team a pair of talented young sophomores as well.

Greens Farms Academy – GFA’s introduction into Class B got off to a challenging start when they lost junior guard Cole Prowitt-Smith to injury. While he hopes to return sometime next month, fellow junior Greg Lawrence seems ready to step into a signature role for the club. David Basich is a talented sophomore guard with a bright future while senior Henry Holzinger has shown himself to be a potent offensive weapon already this season. Throw in 6'5 Max Mitchell and you have a team that could make some noise this season.

Millbrook – St. Michael’s commit Kasai Brown gives them a long wing with clear physical upside while junior guards Jayden Reaves and A.J. Morales will need to take the next step in their developments for Millbrook to reach their potential. Sophomore big man Justinas Norkus gives the team a talented young player to help build a bridge to the future as well. Carter Begel, a post-grad from California, is also expected to be an important contributor.

St. Luke’s – They lost both their coach and arguably the best player in program history after last season but longtime college coach Tony Newsom has taken over on the sidelines while senior guard Jonas Harper has also returned to take on a leadership role. Joining Harper are two other experienced seniors in Andrew Varoli, a shot-maker from long range, and Jackson Selvala, a skill forward. Scott Vollmer provides a 6-foot-11 big man in the class of 2019 who can change the game in the paint while Cole Bryant is a young talent in the class of 2021.

Governor’s Academy – There are a pair of definite weapons in place in senior D.J. Frechette and junior Joe Pridgen. Frechette is a fearless scorer who can put the ball in the basket in a number of ways while Pridgen is pound for pound one of the most efficient forwards you’ll find inside the paint.

Kingwood-Oxford – First year head coach Brad Seaman has his club off to a quick 2-0 start including a win over Class A Avon Old Farms. Seaman will built his attack around the inside-out tandem of Jackson Meshanic and Nick Casiano. Meshanic is a crafty forward who scores it in versatile ways inside of 15 feet while Casiano is a volume bucket getter who can make threes in bunches as well as he can drop tough floaters.

Pomfret School – First year head coach Robert Toste takes over a Pomfret team that graduated a significant portion of their top performers from a year ago. They’ll benefit from the addition of East Hartford transfer Isaiah Williams though as he has the skill and playmaking ability to put up big numbers from day one.

Pingree – A long time Class C powerhouse, Pingree jumped up the ranks this year and hopes to compete for a spot in the post-season despite a young roster. They’ll look to tri-captains Ricky Arias, David Massillon, and Jake Spaulding for leadership both on and off the court.