Nelson Makes His Pick in NE-10 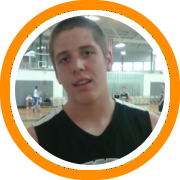 St. Anselm College was named the winner of the Isaiah Nelsen sweepstakes on Sunday, earning a verbal commitment from North Andover’s six-foot-six forward.

Nelsen was one of the biggest stock risers of the spring AAU season and his momentum has only continued to build since then.

It began in April at the Providence Jam Fest when he put together a starring performance with his New England Storm team and caught the eye of the Fordham staff.  Two months later he landed his first full scholarship offer from UMass Lowell.  Subsequent offers have come from Assumption, Merrimack, and St. Anselm in recent weeks.

Nelsen, who is an excellent student in the classroom, was also considering Bates and Colby of the NESCAC when making his final decision.

A versatile inside-out forward, Nelson was intriguing to college coaches because of his ability to create match-up problems on both the post and the perimeter, as well as his high basketball I.Q. and good feel for the game.

As a junior, Nelsen was a critical component of a North Andover team that went on to capture the championship in the Cape Ann League.  This upcoming season, he is expected to be one of the top seniors in the MIAA and will team with Derek Collins and Brendan Miller as North Andover hopes to contend for a division II state championship.