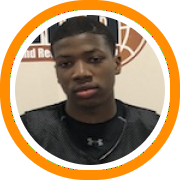 The first mid-season report in the state of Connecticut focused on the class of 2019 where we updated rankings to include newly arrived prep products while identifying top prospects, recent risers, and the new names to know.

As we begin our series on the junior class of 2020 the process remains the same, albeit without quite as many new names. In fact, four of the top five prospects remain unchanged as Nate Tabor, DeMarr Langford, Hassan Diarra, and Matt Cross have all solidified their status with strong seasons thus far.

From a team standpoint, Putnam Science has a class worth noting as they feature five prospects in the top 20 for what is likely the deepest 2020 class in New England at this point.

While Sacred Heart's Nate Tabor remains the top ranked prospect in the class, the race for that top spot has only intensified. Langford had a tremendous fall and has again proven this winter that there isn't another prospect in the class who can impact the game in as many ways, and on both ends of the floor, while Diarra has inserted himself into the conversation by being the most offensively dynamic of the PSA juniors thus far and pushing his recruitment to the high-major level in the process. Despite missing the last three games, Tabor has been dominant for Sacred Heart since returning to the CIAC ranks. Fresh off a recent commitment to St. John's, Tabor has continued to show his combination of perimeter size and offensive versatility while also improving a number of areas in his game. At 6-foot-5, he has true guard skills with his ability to see the floor and create for others. He's made a newfound commitment to his conditioning and gotten a step quicker because of it and is also shooting the ball more consistently than we saw last spring and summer.

Diarra has taken his game to new levels this winter. He missed the vast majority of the grassroots season with injury but showed absolutely no rust when he returned. To the contrary, he's played with unrelenting physicality and his trademark attacking mentality while putting up numbers and making plays against the highest levels of competition to earn his top three status. When it comes to putting up numbers though, no one has been more impressive than Master's Cairo McCrory, who is now a top five prospect in the state and certainly the biggest stock-riser so far this season. A wiry athlete with a hard-nosed approach, McCrory has been dropping 30 with regularity while going head-to-head with some of the top programs and prospects in all of New England.

PSA big man Abou Ousmane is the top ranked newcomer in the state. A wide-bodied 6-foot-9 big man from New York, Ousmane has agile feet and a ton of game in the post. The only other newcomer in the top 15 is South Kent wing Mekhi Gray who has both length and scoring tools on the wing. Cheshire Academy's Asa Beyah is another newcomer to know. The New York native is strong, aggressive, and already holds a division I offer.

When Tabor opted to return to the CIAC last year he followed in the footsteps of Mustapha Heron and Tremont Waters, who also both returned to the state association to finish their careers as the top ranked prospect in the state. After Tabor, the CIAC's best in 2020 include East Catholic southpaw wing Matt Knowling, Windsor's shot-making guard Corey McKeithan, and Bunnell's Max Edwards, a near positionless player in the high school ranks.