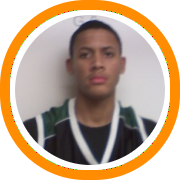 Notre Dame swingman Angel Nunez begins the year as the top ranked player in Massachusetts’ class of 2011 but Pat Connaughton is a close second coming off his incredible summer.  Although Nunez and Connaughton play the same position, their respective games are very different and while Nunez may have the higher upside, Connaughton was the more efficient of the two this summer.  If he can sustain that pace he could very well take over the top spot before too long.

Another guy capable of making a run for number one is Dennis Clifford.  Because he made an early commitment to Boston College, his continued development has flown a little under the radar.  But the fact of the matter is that there are few other seven-footers who can match his inside-out skill set and B.C. beat what would have been a long list of high-majors to the punch this spring.

Northfield Mount Hermon’s Aaron Cosby also made an early commitment this spring, pledging to Seton Hall.  He comes in at number four on this list followed closely by Notre Dame Prep’s Grandy Glaze, a poor man’s Charles Barkley who is already committed to UNLV.  Worcester Academy post-graduate Tavon Allen comes in at number six as the long swingman is coming off an impressive spring and summer season on the AAU circuit.

Connaughton’s AAU running mate Patrick Ackerman was another big winner this summer, picking up his first high-major scholarship offers in the process.  Northfield Mount Hermon’s Vince Van Nes is another big man who has coaches from the highest levels intrigued.

Marco Banegas was another of the summer’s biggest stock risers.  Despite missing the majority of the month with a sprained ankle, the Boston native was still able to push his recruitment to another level by demonstrating his playmaking ability.

Rounding out the top ten is another home grown product in James Kennedy.  The Cushing senior made an early commitment to Boston University last fall but would have been heavily pursued by a variety of mid-major programs (at minimum) had he been available and active this summer.

Brimmer and May’s Chris Sherwood comes in at number eleven.  The Sharon, Massachusetts native scored a consistent division I following this summer with his explosive aerial onslaught combined with an improved skill set.

Deerfield Academy’s Kyle Kager and Northfield Mount Hermon’s Joe Sharkey wrap up the baker’s dozen.  Kager is fresh off his commitment to American while Sharkey made an early commitment to Brown last year and so wasn’t on the summer circuit other than an appearance at the Academic All-American Camp.

While the critics of these rankings will surely point to the fact that only four of the top twenty players currently compete in the MIAA, twelve of the twenty are New England natives and eleven are Massachusetts natives.