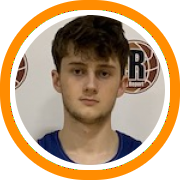 After previous stops in Vermont, Maine, and Connecticut, NERR’s Open Gym Series came to Massachusetts on Saturday night for the final stop in the inaugural series.

The event ended up attracting players from all six New England state associations though and so ended up being a very fitting culmination for a series that has uncovered previously under-the-radar prospects from throughout the region.

We’ll begin our recaps with a look at the senior class of 2020.

Jadon Archer, MacDuffie - Arguably the top performer at the Mass Open Gym, Archer wasn’t just individually productive from start to finish, but able to consistently lead to his team to wins throughout the game portion of the event. He’s bulked up his physique and diversified his game within the last year as he’s still a skilled scorer and shot-maker but better able to absorb contact and make plays for others.

Cooper Creek, Williston Northampton - It says a lot about a prospect’s competitiveness when they already hold scholarship offers from Division I and II programs, yet still want to prove themselves. That’s exactly what Creek did too as he again showed why he is one of the top floor-spacing big men in the region while also showing off some increased passing and playmaking ability off the mid-post.

Justin ONeill, Bedford (NH) - He’s exactly the type of guy these events were designed for - talented and under-the-radar. O’Neill is a late-bloomer with an increasingly strong body, soft touch out to the arc, and a sneaky driving game. In short, he’s a name that scholarship level coaches should familiarize themselves with and one of the top prospects in the NHIAA.

Sam Stevens, Mansfield - Arguably the best shooter in the field, Stevens has a virtually pure release with a complimenting skill-set and heady floor game. He’s also a late-bloomer physically who has continued to grow and still might not be done yet. Besides being a knockdown shooter, Stevens can handle and finish with both hands, moves the ball well, and competes on the defensive end.

Ben Rice, Whitman Hanson - Probably the most pleasant surprise in the field, Rice is a skilled 6-foot-7 forward with a very bright future. He has a clean release and a lot of floor-spacing potential, but also raised eyebrows with some passes off the dribble. With a frame that hasn’t filled out yet, he’s a long-term sleeper who is just starting to emerge.

Earl Tucker, Milton - Coming off a strong fall on the ZG Path to the Belt, Tucker continued to impress here. He’s strong and physical yet still able to maneuver his body and slip into cracks off the dribble. He was devastating with the ball in the open floor, able to absorb contact in the half-court, and ultimately on the verge of putting all of his undeniable talent together.

Chris Lim, South Kent (CT) - The second year Swedish import is a big guard with a slippery dribble-drive game. He’s pretty quick, not just with his first step but also with his ability to accelerate mid-drive, and a crafty lay-up maker around the rim. Lim is also an excellent student in the classroom.

Billy Whelan, Williston Northampton - Following a decorated high school career at Hamilton-Wenham, Whelan has now moved on to the NEPSAC where he figures to be a key part of the backcourt rotation for Williston. The southpaw is skilled, gritty, creative with his passing, and always competitive.

Samuel Adusei, St. George’s (RI) - Adusei is compact, quick, strong, and hoping to play his way into scholarship level looks this season. He can get to the rim and finish with craft but also differentiates himself with his ability to defend the ball.

Wrenn Robinson, South Kent (CT) - He’s a power guard with a big upper-body who is strong with the ball and physical with his driving game. He imposes his will physically, is in constant attack mode, and able to create with a tight handle as well.

Jason Rhett, Williston Northampton - Rhett has a great frame that grabs your attention at first glance. He plays both ends of the floor, was one of the better defenders in the field, and also able to make hard straight-line drives and open perimeter shots.

Amin El Amrani, South Kent (CT) - He made things happen on the offensive end as he pushed the ball and created tempo, showed individual offense at all three levels, but was still able to move the ball and make some plays for others.

Jalen Olivero, MacDuffie - A hard-working and high-character player who is beginning to build up his body and adjust to a new level of competition, Olivero has a serviceable jumper and can also be productive off the dribble at times.

Stephen Kelly, Whitman Hanson - He makes open shots but is most impactful with his wealth of intangibles. He’s a physically strong, high-motor guard who uses his body, competes, defends, and communicates on both ends of the floor.

Justin Tedeschi, Smithfield (RI) - A fundamentally sound and skilled guard who stood out early in shooting drills and continued to differentiate himself with his ability to make shots throughout the course of the night.

Griff Hopkins, South Kent (CT) - A coach’s son who is doing a post-grad year to build up his body, Hopkins made his fair share of plays, had very good perimeter footwork, excellent perimeter size, and plenty of untapped upside as he fills out his frame.

Daylon Trotman, Milton - Trotman is a physical guard who has a handle, knows how to lean into his defender and use his body to create space. Trotman also plays strong with the ball and snaps his passes around the perimeter.

Kyle Pasieniuk, Kennebunk (ME) - A scrappy guard who made the trip south after missing the Maine Open Gym, Pasieniuk stood out with his energy level, crafty scoring ability, shot-making, and even a couple creative passes while attacking the baseline.

Matt Lasalandra, Smithfield - The southpaw started to make a name for himself here by pushing the ball up the floor, creating tempo, and showing the ability to manufacture scoring opportunities while in first gear.

Luke Bitters, South Kent (CT) - The Cavalry Christian alum came back close to home where he had a decorated high school career and finished as the school’s all-time leading scorer. He knows how to score the ball, has a strong (college ready) body, and is an extremely hard worker.

Ian Thurlow, South Kent (CT) - Thurlow was one of the first guys to stand-out as his motor separated him right away. He’s physically strong and able to overpower many of his peers but also snaps passes and makes shots with a compact release.

Gabe Murphy, South Kent (CT) - The post-graduate forward showed definite value as a floor-spacer from behind the three-point line, particularly in the corner, but also has the size and body type to diversify his attack down the road.

Omari Webb, MacDuffie - Webb is far from a finished product but his long-term tools were on full display as he possesses long arms, good shoulders, and an intriguing body type along with good mobility, a little bit of a bounce, and some face-up driving ability.

Heston Tucker, Hamden (CT) - He’s well-built with a strong body and good size at 6-foot-5. He can often impose his will inside the paint but also showed some versatility as he was able to lead the break effectively and wasn’t incapable of knocking down some open jumpers.

Will MacDonald, York (ME) - A hard-working and high-character prospect with good positional size and a solid fundamental foundation to his game, MacDonald looked like the latest member of a prominent basketball family to have a future in the game.

Jonathan Kazor, Pomfret (CT) - Kazor is physically strong and a very hard-worker. He impacts the game in a variety of ways because he gets into the paint, posts smaller guards, passes well, and can play multiple positions. He’s also extremely high academically.

Lewis Garcia-Martinez, Revere - He owns a definite physical upside with a long and rangy body that gives him potential as a slasher and defender. He projects as being at his best in an up-and-down full-court type system.

Emre Topcu, Marianapolis (CT) - Whatever he may have lacked in athleticism or individual offense, he more than compensated for with unselfishness, IQ, and sheer passing ability. Whether it was reversing the ball trailing the break or shovel passes coming down the lane, he was one of the better distributing wings in the field.

Angel Strange, Hudson - Coming from a small MIAA school, Strange held his own in this setting. He played hard, was vocal and engaged, had a strong body, and pretty good burst off the bounce.

Ali Abdel-Jalil, Marianaplis (CT) - He handled the ball pretty well, was consistently able to penetrate the defense, and had impressive footwork, both off the catch and even finishing plays with step-throughs at the end of his drives. He also has the potential to play multiple positions.