Maiwen headed back to Maine 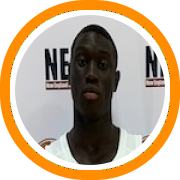 University of Maine head coach Richard Barron continues to keep, or in this case bring back, local talent from within the state's borders.

The latest example if Wol Maiwen, who made a verbal commitment on Saturday night.

Maiwen graduated from Edward Little High School in 2019 where he was a finalist for Maine's Mr. Basketball award. He spent this past season at Williston Northampton School in Massachusetts.

"It's home! I have a huge amount of support here in Maine and being able to play here is a great feeling," he told NERR's Zack Sandberg.

Maiwen is a high-level athlete who has used his extra year to begin to develop his skill set and overall feel for the game.

He has played AAU basketball with the Maine Renegades, Metro Boston, and most recently, Blue Wave Elite.

Maiwen is the third Maine native to join the Black Bears' 2020 class as he joins Sanford's Leyton Bickford & Matt Fleming, who spent a post grad year at Army Prep.