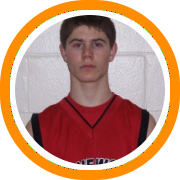 On Sunday, August 14, the elite talent from the state of Vermont gathered at St. Michael’s College to take part in the annual Lone Wolf Athletics College Showcase.  With several college coaches on-hand to check out the top talent from the Green Mountain State, as well as a group of skilled Canadian prospects, here’s a look at who stood out with their play throughout the five-on-five format on Sunday.

Troy Davine- The elite native-Vermonter at the event, the Vermont Academy-bound combo-guard impressed with his fluid athleticism in the open floor and ability to attack defenders with diverse skill to share and score the ball in a variety of ways.  At six-foot-two, Davine can knock down shots from behind the arc, break people down with creativity off the bounce, and shows flashes of being a lockdown perimeter defender with a disruptive blend of length and quickness.

Jackson Mackey- Another standout at the event poised to be a prime contributor for head coach Jesse Bopp at Vermont Academy in the fall, the six-foot-one guard showed his prowess as a knock-down shooter from three with a quick, compact release from distance and the feel to attack close-outs with an efficient space dribble in either direction for a pure mid-range pull-up.

Matt St. Amour- Joining Davine as one of the premiere performers at the event, the six-foot-two off-guard solidified his reputation as a sniper from three with multiple jumpers off quick down-screen action, while displaying an added burst and toughness to attack the rim and finish through contact.

Jaleel Webb- A superb athlete with the bounce and body-control to finish with flare in transition, the Dawson (CAN)-product was among the most athletic players at the event who also displayed a polished feel in the half-court to score and share the ball with explosive creativity off the dribble.

Michael Dosado- Joining his Canadian-counterpart Webb to form the premiere backcourt tandem at the event, the quick, crafty lead guard from Vanier consistently made plays in the lane with great feel, while proving himself as a capable scorer with a reliable stroke from three and a variety of floaters over size.

Austin Robinson- An impressive athlete with an impactful combination of length and quickness on the perimeter, Robinson is a game-changer defensively with his ability to force turnovers and get out in transition, while showing flashes of a creative offensive skill-set he uses to attack the rim and create space for a smooth lefty-jumper.

Marcus Willingham- One of the most efficient interior scorers at the event, the six-foot-four forward consistently beat his defender up the floor for athletic scores in transition, and displayed his versatility with developing face-up skills out the arc.

Chad Copeland- An emerging athlete on the low-block at six-foot-six, Copeland demonstrated the skill and toughness on the interior that makes him an intriguing prospect with the ability to score the ball with either hand in traffic and stretch the floor with a developing stroke out to the three-point line.

Pavin Parrish- A quick, shifty lead guard known for his creative handle and crafty playmaking ability, Parrish impressed with flashes of a pure mid-range jumper that would make him extremely difficult to guard along with his established knack for executing high-risk, high-reward plays off the dribble.

Ryan Booth- A sniper from behind the arc with NBA-type range to stretch opposing defenses well past the line, the rising sophomore shows a highly-valued skill of making shots in bunches from three and a feel for attacking close-outs and setting up teammates for easy scores around the rim.

Chris Collins- While his motor and desire to score and rebound through contact must improve, the six-foot-six post possesses tremendous upside with his natural ball-skills and length to pursue the ball through traffic and finish from a variety of angles around the rim.

Evan Grubb- With a determined motor and solid understanding of how to hunt his shot off dribble-penetration in the half-court, Grubb knocked-down shots from the perimeter and repeatedly attacked retreating defenders for plus-one scores through contact.

Matt Field- Field made defenders pay for leaving him with space at the arc and showed he was more than just a stand-still shooter the with the ability to use various pin-down and curl-action to get loose for his feathery stroke off the catch.

Tre Hysell- A strong, athletic lead guard with the handle and instincts to break people down in transition, Hysell is a natural playmaker off the bounce with a developing stroke from behind the line.

Josh Claflin- Mirroring Hysell as a physical, attacking playmaker with a straight-line mentality off the bounce, Claflin consistently got to the rim with a defender on his hip and elevated through contact to finish with strength and skill at the cup.

Jake Maynard- Known for his ability to knock down shots from three, Maynard combined his ability to score the ball from distance with a determined will to attack the rim off the bounce and use his size and skill to convert from a variety of angles around the rim.

Anthony Granai- Granai features a strong, college-ready body he uses to bully his way through traffic in transition and a polished long-range skill-set that results in a flurry of perimeter jumpers when defenders choose to respect his ability to drive the ball to the rim against a hard close-out.

Tom Carton- A big-body on the interior with the ability to hit shots out past the arc, Carton impressed throughout the afternoon with his shot-making from the perimeter and a willingness to mix it up on the low block for rebounds and tough scores through contact.

Peter Sylvester- With a smooth stroke from three, Sylvester made shots consistently throughout the event and demonstrated a soft touch around the rim to score the ball off putbacks through congestion.