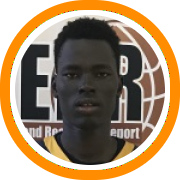 With four days of competition and instruction, all of which was closed to both the general public and mass media, players battled it out to show which were some of the brand's most promising underclassmen.

In the class of 2018 New England was represented by Tilton School's Marcus Zegarowski, St. Andrew's Cole Swider, and Jordan Hardwick and Arashma Parks from Commonwealth Academy. NMH's Maxwell Lorca-Lloyd and Cheshire Academy's Chol Marial were in attendance from the class of 2019.

Marial was unique because he was the only local product selected who does not play for a Nike sponsored grassroots team.

Marial plays with CBC in the UAA while Swider plays with BABC, Zegarowski and Hardwick with Expressions, and Parks and Lorca-Lloyd with PSA Cardinals.

The Elite 100 was also the first time many of these prospects were officially measured and Nike released those numbers on Monday. Players were measured without shoes on, meaning they'd be expected to add about another inch with sneakers on.