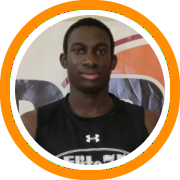 Lee Academy senior forward Jean Yves Toupane made a verbal commitment to St. Bonaventure over the weekend and is expected to sign his National Letter of Intent before the end of the end of signing period.

Yves Toupane is a native of Senegal who is now in his second season at Lee Academy after debuting last year as a junior.  This summer he ran with MBR on the AAU circuit, making his first appearance at the New England Elite 75 Showcase before traveling to Orlando for the Super Showcase and Nationals.

While Yves Toupane made his first appearance in a Lee uniform in September of 2010, his American debut actually came several months earlier when he earned MVP honors at the 2010 Jordan Brand International Game held at Madison Square Garden in April.

Yves Toupane is a long and skilled perimeter forward with a soft shooting touch from long range and a knack for scoring the basketball.  His jumper comes complete with a high release that allows him to get it off with very little separation from his defender.

He becomes the first player to commit to St. Bonaventure in the class of 2012 where he will be joining a Bonnies team that has been on the rise under fifth year head coach Mark Schmidt, having won at least 15 games in each of the last three seasons and beginning the 2011-2012 season picked to finish third in the highly competitive Atlantic 10 Conference.