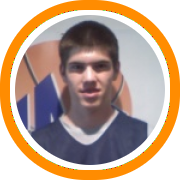 Brian McNeal 2013- McNeal finishes with authority around the cup and has an advanced repitiore of moves. The athletic swingman can step outside and hit 3's consistantly with his picture perfect form. Playing the 4 and 5 for his undersized team, McNeal looks to be a wing player at the next level. If that wasn't enough he hit a near halfcourt three pointer to send his night game into overtime at the buzzer, scoring all of his teams points in the extra session. He did just about everything right today.

Joe Bunce-Grenon 2013-high flying wing who finishes at the rim. Bunce is an impressive prospect who showed off his high motor on both ends. Joe also hit a gamewinning shot in his double overtime contest.

Jordan Brydee 2014- The St. Sebastian's 2-guard has great size and athleticism for his age. The 6 foot stud connected on jumper after jumper during todays action. One of the best players we saw hands down.

Pat Kelly 2013-Coaches have been waiting for Kelly to break out and today he did just that. He got into the lane at will on day 3 and created for himself and others.

Jack Roberts 2013- Roberts upped the level of team play today with his fast break buckets, three point shooting, and dimes in transition. Roberts also excels off the court, sporting a 4.0 GPA college coaches will love to see down the road.

Ryan Haggerty 2013- mature bodied 3/4 who works hard and has an excellent skill set. Haggerty has a nice touch around the rim and completes what looks to be an already impressive freshman class at Wachusett Regional next season.

Kevin Fung 2013- The 2 guard has a nice 3 point stroke and an impressive court sense that allowed him to connect on multiple bounce passes to his teammates.

Aaron Johnson 2016- The Milton Academy guard posseses a quick first step and knows just when to change gears. Johnson has excellent ball control and gets others involved.

Will Cartwright 2013- the skilled face up big man showed that he was talented inside and out. Will is a fierce rebounder and looks to have a bright future.

Andrew Cartwright 2014- Size appears to be in the family as Will's brother Andrew stands at 6'4 and is only a rising 8th grader. The Guilford,Maine native has a plethora of moves in the post and is physically ahead of the game.

Andrew Jacob 2014- Jacob showed off a nice stroke from the outside, and even showed off an impresssive stepback jumper later in the day.

Ricky Sullivan 2013- ripped power player who comes with 100 percent effort and intensity every time out. Sullivan has a varsity ready body and looks like he could contribute next year.

Chris Lowry 2014- strong point guard who finishes with either hand and comes with 100% mental fortitude. He also has established himself as one of the top rebounders from the point guard position in camp.

Connor O'Brien 2014- The Thayer Academy two guard uses his length to finish around the basket. His high motor allows him to constantly get open.

David Morin 2013- strong 3-4 with handle who showed an impressive back to the basket game.

Mike DeBettencourt 2013 and Ryan Dean 2013-combo guards who puzzled defenders with their ballhandling skills. The two formed a nice one- two punch in their teams backcourt.

Mike Daskalakis 2013- the shooting guard seemed to be the Derek Retos (knocking down a plethora of shots last week at SW2) of the jr.elite camp, hitting six 3-pointers in his teams overtime win.