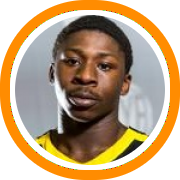 Perhaps no player in the gym had as much upside as 6’7” 8th grader Goodluck Okonoboh (pictured above).  Okonoboh is Alex Oriakhi’s cousin and he plays a lot like the UConn bound big man as he has many of the same physical gifts along with a knack for blocking shots and finishing with dunks around the rim.  He lacks any type of awkwardness that characterizes many young big kids and instead is already flying above the rim.  He’s also got an infectious personality along with a terrific approach to the game that’s bound to make him a success.

Another player with the potential to be a star down the road is 6’7” 7th grader Jarred Reuter.  Like Okonoboh, he not only has all the physical tools, but also appears to have the intangibles necessary to make it big, as he plays with great energy and is always communicating on the court.  In terms of his game, there’s plenty to like as he’s a true inside-out threat who can impact the game in a number of ways.  He’s a lethal mid-range shooter who also showed he can now score with his back to the basket.  He also passed and rebounded well, finishes above the rim (as well as against contact), and had a polished skill set.

And of course as we told you yesterday, camp MVP Jared Terrell was also sensational earning the scholarship to Hoop Mountain’s Junior Elite Camp with his well rounded performance.

Tyree Robinson – Only a 7th grader, Robinson already has all the physical tools as he’s quick and athletic, while standing 6’2”.  He’s constantly running the floor and finishes everything in transition.

William Cartwright – The 6’6” center from Maine has great size and a nice fundamental base to his game.  He showed experience beyond his years with his back to the basket as he already knows how to establish position and can score with either hand around the rim.

Evan Hopson – A combo-forward who can score both inside and out, Hopson is a physical player and aggressive scorer.  He’s got an already strong body, goes hard to the rim, and can simply overpower most kids his age.

Brad Kimball – He combines plenty of natural ability with a terrific energy level to be a very effective player.  A mismatch problem who can attack both inside and out, Kimball was efficient inside the paint, driving hard to the rim from the perimeter, and utilizing the jump stop as well as anyone in the field.

Brandon Malloch – If the showcase awarded a defensive player of the day, Malloch would have likely won it.  He did it all on the defensive end: blocking shots; coming up with steals; rotating quickly…and was equally effective in the open court after forcing the opposition into turnovers.

K.J. Baptiste – He comes from good stock with a long list of relatives who have history in the game.  Baptiste is a very well schooled big man with a good feel for the game and a nice ability to pass the ball for a big man.  He scores both inside and out and is also a good rebounder.

Luis Rodriguez – An extremely athletic combo-forward who is a tremendous leaper and big time competitor.  He finished plays around the rim all day and was especially difficult to stop in transition.

Andrew Cartwright – William’s little brother is truly ambidextrous and it shows around the rim as he has a super soft touch with either hand.

Alexander Fisher – Fisher is a young player with good size.  He’s got a bright future ahead of him once his frame fills out as he has some noticeable tools.

Bonzie Colson – A well schooled big man who made his presence felt in several different ways.  He was a major presence on the glass, a consistent finisher around the rim, and even a capable shot blocker defensively.

Kyle Lentini – Can score both inside and out but makes impact in variety of other ways including rebounding and passing, including one especially pretty long outlet pass.

Bobby Ahearn – A big and strong interior presence who can outmuscle the competition more often than not, Ahearn finishes plays inside very consistently.

Timothy Berry – Showed some good moves and footwork with his back to the basket and also was productive on the glass, going to the backboards aggressively.

Brian McNeill – McNeill is a talented youngster who is 6’3” with long arms and obviously still growing.  Look for him to make a name for himself down the road.

Christopher Baldwin – Demonstrated the rare ability to impact the game without needing to have the ball in his hands.  Was a major factor defensively with his shot blocking ability against dribble penetration.

Nick Patterson – He hasn’t filled out his frame and yet he was still blocking shots inside showing great timing on the defensive end.  Offensively, he showed impressive footwork along with a soft touch.

Kristopher Kodys – He didn’t back down from guys who were older, bigger, and stronger, and that was never more apparent than when he drained a three-pointer over a contesting Terrell.

Khalid Thompson – A face-up four man with a very well developed perimeter skill set including a super soft stroke and great footwork in the rip through series.

Aaron Falzon – Made his presence felt on both ends of the court.  Scored around the basket offensively and was a star defensively, pressuring basketball and showing an ability to guard multiple positions.

Sean Allison – He has two distinct advantages over the competition; he has great size on the interior, as well as an understanding of how to use it, and he’s a lefty which throws off lots of defenders.

Duncan Sewall – Has a rare combination of being strong and physical as well as extremely intelligent on the interior.  That gives him the potential for a bright future.

Matt Costello – Costello made the defense pay from a variety of spots on the floor.  He’s a very accurate standstill shooter from the perimeter and also a crafty scorer on the interior.

Jared Wilson – He has an explosive first step and was one of the most effective slashers in the field.  Scored in high volume during the two game sets.

Andrew Filthaut – He stood out to the coaches on staff because of the tremendous effort he put in all day long.  He was a relentless worker on the glass and also a factor in transition because of how hard he ran the floor.