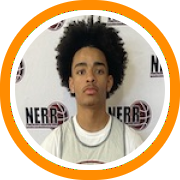 It may not be the program slogan, but it might as well be.

While many clubs in New England are in an arms race to put together the most teams, House We Built is much more interested in the quality of the teams they have.

A descendant of Wright Way Skills, House We Built is now in just their second season after being forced to launch their new brand last year amidst the pandemic.

This summer, they appear poised to make even more noise, with a nine-man roster full of players once again looking to prove themselves.

Their leading returning scorer is Dan Becil, who picked up right where he left off after a breakout junior season at Worcester Academy, in which he led the Hilltoppers in scoring as well. Becil has always been known for his toughness and I.Q., but the progression of his skill-set is equally noticeable as well. He proved himself a true guard during the winter, even sliding over to the point for large stretches, and has now developed his shot-making abilities to match, making him a highly versatile threat.

Mansfield alum and incoming Cheshire Academy post-grad Matt Boen is also back on a full-time basis after splitting time between the hardwood and the football field in the spring. Boen is known for making plays on both ends of the floor while bringing an exciting style. He’s going to have the ball in his hands this July and the opportunity to prove himself a scholarship player while stepping into the void left by Burns’ departure.

Milun Micanovic, a 6-foot-10 big man from the Knox School in New York, is another player who is expected to play a major role this month. A native of Serbia and Montenegro, Micanovic is new to the program but poised to make a name for himself in a hurry because of his combination of size and versatile skill.

Maybe the most intriguing, under-the-radar prospect on the roster is Rivers’ 6-foot-7 forward Drew Martin. He’s long and smooth with good hands and soft touch. He’s just starting to put the pieces together though after growing 6 inches in the last two years.

Marianapolis Prep’s Jayden Reyes is perhaps even more of a long-term stock, but there’s undeniable upside at the end of the road. The big wing has a long and rangy build and is also the most athletic player on the roster with potential on both ends of the floor.

Brockton rising senior Niko Lutz is an ultra-reliable, but also versatile, frontcourt piece who can both operate with a fundamentally sound game in the post but also provide a spot-up shooting threat. Physically, he owns a solid build that should continue to add muscle mass in a college weight room.

Vermont Academy’s Lauri Kallio is the floor general of the group. A true point guard and naturally gifted passer, Kallio delivers balls with touch and timing, playing both in transition as well as in the half-court. He has good positional size, finishing ability, and a consistent pull-up game.

MacDuffie’s Timmy Fasehun is a versatile combo-guard who can both play on and off the ball with a tight handle and consistent shooting range when in rhythm.

Kingswood-Oxford’s Esco Greene is the only rising junior on the roster and another intriguing long-term prospect because, while he may not yet have a big reputation, he owns clear and multi-dimensional tools that should allow him to come on strong over the course of the upcoming months.

Every player on the roster has three things in common currently. One, they all project to be heavily recruited to play college basketball. Two, none of them have committable scholarship offers currently on the table. Three, they are competing for a chance to change that.

Chances are some of them likely will before it is all said and done.