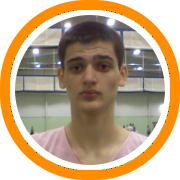 For an age group that is not always known for its great fundamental play, the U14 final was played like a high school varsity game.

Xpressions Elite began the game in a 2-3 zone but failed to match the Spartans toughness. The guards on Xpressions were forcing the issue early and turning the ball over, which gave the Spartans many opportunities to score on fast breaks. Spartans guard, Marcus Neale, was giving Xpressions problems with his smooth 3-point shot and ability to find open teammates near the hoop. Neale led his team in scoring with 16 points.

Midway through the first half, Xpressions big man, Jarred Reuter began to takeover. For the game, Reuter had 33 points off of many free-throws, post moves, and mid-range shots. He has  great size and a nice touch around the hoop and nobody on the Spartans could guard him.

However, the Spartans did not back down once in this game. Their entire team displayed great toughness and desire to win. Mickey Mendes was pushing the tempo and knocking down clutch three-pointers and their big men were crashing the offensive boards well.

In the end, the game was going back and forth with two minutes left in the game. Xpressions big man, Jeremy Miller, was altering and blocking shots from left and right. It was close for the entire game, but Xpressions size advantage proved to be too much for the Spartans.

Although the end score may not indicate it, this game was neck and neck for a majority of the time.

BABC was playing without Goodluck Okonoboh, but this did not prevent them from playing like they usually do. Wayne Selden began attacking right off the bat for BABC. He hit a deep three-pointer and had a monster put-back dunk in the first half. Ramon Gibbons, however, seemed to be able to score a basket when the momentum was not in their favor. He and guard Jaylin Blakely led the way for Xpressions.

After a 31-31 halftime score, BABC took complete control of the game. They were knocking down clutch three-pointers and hitting all of their free throws, something Xpressions was not doing. Rene Castro, Bobby Ahearn, and Kamari Robinson came up with some clutch plays to close out the game.

BABC took control from the onset with a 6-0 run to start the game and never took their foot off the gas pedal.  Egi Gjikondi was aggressive very early on and continued through the entire game, posting 24 points.

The player that got the crowd the most excited was Nerlens Noel. Noel displayed his ability to dunk from a standstill and his ability to block shots from wide radiuses due to his lateral quickness.

For this entire weekend, Noel has shown flashes of an improving face-up game as well. His post repertoire is improving fast. On one play Noel spun off a defender in the mid-post area and dunked it with authority. Noel finished with 19 points.

BABC’s bench was no less dominant as Georges Niang, who spelled Gjikondi and Noel inside,
overpowered opponents and was un-guardable in the post.

The Lightning built a 37-29 lead at half behind their guard oriented attack but Expressions made a tremendous comeback in the second, getting contributions from numerous sources to score the championship.

Ricardo Ledo led the way with 18 points while the interior tandem of Holderness' Gabas Maldunas and Imoh Silas did work inside.  Maldunas finished with a double-double while Silas dominated the glass, accumulating at least 15 rebounds.