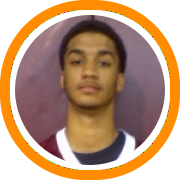 Here’s a look at the four players selected to go to Philadelphia for the All-American Camp:

Denzel Brito – For the second consecutive year, Brito played himself into an invitation to the All-American Camp with his performance at Headliner.  As we told you in our Saturday recap, he was the most impressive player out of the gate on day one as his work ethic and leadership made him an instant hit during morning stations.  He continued to shine in 5 on 5 games as he showed the type of creative force he can be when given the opportunity.  His left to right crossover through the legs was lethal and it wasn’t long before he heated up from the perimeter with his jumper.  He was also an easy guy for the evaluators on hand to like as he always competed hard and showed a great attitude.

Shabazz Napier – Truthfully, he made a handful of sloppy plays in the first half of the day on Saturday while trying to do too much.  Watching him toy with some of his defenders you could almost hear him saying to himself ‘it would be too easy to pull-up right now’ or ‘I know I can take you off the dribble anytime I want’.  So instead he tried to challenge himself and swung for the fences too often.  Like most home run hitters he connected on some and missed badly on others.  Once he settled down he put on a show as usual.  Bottom line is that no one in the field could match his ability with the ball in his hands and so he was probably an easy selection for the All-American Camp.

Hector Harold – Everyone knew how important an invitation to the All-American Camp was for him after he jumped on a plane from California just to try-out at the Headliner Camp.  He put on a show in the last game set of the day Saturday with 34 points and kept it going on Sunday.  He’s got all the trimmings of a high major wing man with his 6’7” frame and silky smooth three-point shot and he showed his versatility scoring the ball throughout the weekend.  Now he’s booking another plane ticket…California to Philadelphia departing on July 7th and returning on July 10th.

Tyler Olander – He was as good as we’ve seen him in quite some time this weekend.  But what occurs to us is he’s actually an easy guy to take for granted because of just how consistent he is from weekend to weekend.  But ultimately there aren’t too many 6’9” lefties floating around who can stroke the 3, score with their back to the basket, or coming up with athletic plays around the rim…and he reminded us of that this weekend.  Vanderbilt may have been the first high major school to get on board but you can bet they won’t be the last.